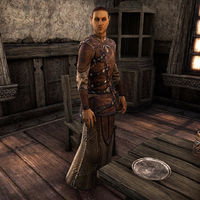 Nelerien is an Altmer found in the settlement of Vlastarus. From him you can accept half of the daily quests that are available for doing in Vlastarus, the remaining ones are given by Jurana.

Nelerien will greet you with:

"Don't tell me you have a problem too."

You will have the option of asking him some questions while you perform his tasks:

Who runs Vlastarus?
"No one does, officially. But Jurana and I get stuck with most of the planning, organizing, and poking people to help out around here. I guess that means we're in charge, until someone else is dumb enough to want the job."
Is it really that bad?
"Stick around and see. A day when I don't hear complaints from ten people is a good one. And everyone's always asking me for things to do. Sometimes, I just send people out on dangerous jobs hoping they never come back."

What's the trouble?
"A giant bear has been attacking travellers to the northeast. The locals call it "Gaping Maw." Even the wildlife around here is against us. Would you kill it, please?"
I'll see to it.

"Deal with that bear as soon as you can. One fewer hungry mouth around here would be a good thing."

Once the bear has been slain, you can return to Nelerien:

"Other towns have rats or squirrels or cats. We've got bears."
I killed Gaping Maw.
"Good work. Bears just seem attracted to that area, for some reason. A new one will show up sooner or later. But at least we can add another bear-skin rug to the pile."

Not me. Sounds like you do though.
"Yes, a bad one. Nisin Cave has become a Shadowed Path den. Worse yet, they have a Dremora named Barasatii leading them. I've got a bad feeling about her. Think you could kill her for us?"
I'll see to Barasatii.

"I won't be able to sleep until that Dremora is dead."

"That foul creature. I expect her to lead the Shadowed Path into Vlastarus any minute now!"
Barasatii is dead.
"That's a relief! Dremora can't be killed, but you've banished her from our plane for a time; thanks to you we can breathe a little easier today."

No, but it sounds like you have some.
"A few. One you might be able to help with. To the east of Vlastarus lies Juras Fall, haunted by undead. A former friend of mine, Captain Juras, walks among them. He should be at peace. Would you lay him to rest?"
I'll see to it.

"I wish I could put Juras to rest myself, but I'd never survive the trip, let alone the undead that infest that ruin."

Once Captain Juras is put to rest:

"Is it done?"
Yes, Captain Juras is at rest.
"Good, though it seems he never stays at rest. All I can do is continue to have him put down each time he arises. Something about that ancient ruin refuses to let the dead lie in peace."

What's wrong?
"Goblins! The Rock Bone tribe has set up camp to the northeast. Only a matter of time before they attack. How about if you visit them first?"
Always ready to kill Goblins.

"The fewer Goblins around, the safer I feel."

Once you have killed a good amount of the tribe:

"Imagine Tamriel without Goblins. Well, I can dream, can't I?"
Now there are a few less of them.
"Nothing I like more than the smell of dead Goblin. As long as we keep the Rock Bone numbers down, Vlastarus should be safe, from them at least."

No, but I do need a job.
"Good. Cultists of the Shadowed Path have taken over Haynote Cave, north of here. Soon they'll start preying on us. If you'd kill some of their necromancers, that should slow them down."
I'll see to it.

Once you have killed a few necromancers:

"Did you make it to Haynote?"
Yes. There are fewer Shadowed Path necromancers now.
"That's a start. A good start. The Shadowed Path is always recruiting new scum to fill their ranks, but you've weakened them for now. I appreciate it."