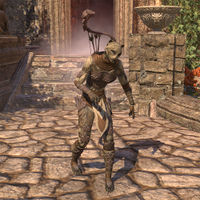 Queen Numara shambling out of the pedestal

They were interred in the crypts below Rimmen Palace only to be exhumed six years later and raised as undead defenders of Euraxia, which affected their surviving daughter Khamira.

This Online-related article is a stub. You can help by expanding it.
Retrieved from "https://dev.uesp.net/w/index.php?title=Online:Queen_Numara&oldid=1964151"
Categories:
Hidden categories: