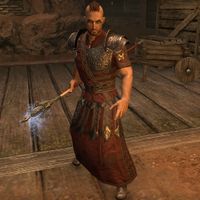 Saevus Minutius is an Imperial mage who leads the Skooma smuggling ring, the Dirty-Drakes. He has a talent for summoning Daedroths, which he has been using as a distraction from the Dirty-Drakes' moon-sugar thefts. He can be found in the Skooma Workshop within the Merryvale Sugar Farm Caves.

When you track down the monster that has been harassing the local farmers, you can observe Saevus' projection talking to the beast.

Saevus Minutius: "Very good, my pet. That should distract those farmers for quite awhile."

He will then notice you.

Saevus Minutius: "An intruder! Quick, Dolor, kill them at once!"

After you find the hidden Dirty-Drake lair beneath Merryvale, you can overhear Saevus talking to someone as you progress through the tunnels.

When you reach him in this workshop, he will be with the brother of Dolor, Timtem the Terrible:

Saevus Minutius: "So you're the ones interfering in my operation? You'll pay dearly for that."
Razdum-dar: "Now's our chance to end this, once and for all!"

This Online-related article is a stub. You can help by expanding it.
Retrieved from "https://en.uesp.net/w/index.php?title=Online:Saevus_Minutius&oldid=2091736"
Categories:
Hidden categories: