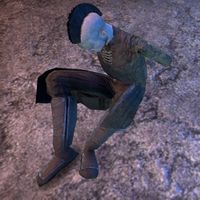 Scaevola Calvisius is an Imperial member of the Scaled Court who was captured by the Undaunted and Star-Gazers and brought to the Sanctum Ophidia.

When you enter the Sanctum Ophidia, you may overhear Atildel talking to Scaevola Calvisius.

Atildel: "Shut up or I will shut you up!"
Scaevola Calvisius: "The Serpent will reclaim this land! Render mortal cities to dust! Devour your glittering towers in primeval growth!"
Atildel: "To Oblivion with the lot of you, and your damned Serpent."

You can ask him some questions, though he will be barely civil.

"What do you want? Have you fools come to your senses? Ready to set me free?
The master will do it himself after he peels the skin off you! He will not suffer a member of his Court humiliated like this! I will not suffer it!"

What is the Scaled Court doing here?
"You people have no idea what's coming—how small you truly are."

Tell me.
"The Star-Gazers have it so wrong.
You think the master wants to rule you? You think there's a place for you maggots in his kingdom? You're all dead!"

And what puts you above the Serpent's wrath?
"We freed him! He wouldn't be here but for us, and he knows our worth! When his work is done, we will descend with him to his den, his new kingdom.
Tamriel will return to its rightful state."

Tell me about your master.

'He hates you. He hates all of you, more than anything in this world. More than the Celestial Guardians who stand in his way.
But don't take my word for it. You can meet him yourself through those doors."

What is this place?

"These caverns make up the Sanctum Ophidia. And my brothers and sisters will give their lives before they let you near its secrets.
Though, it's likely you'll die first. Just ask these fools."

If he is spoken to again after defeating the Serpent, he will be shocked you returned.