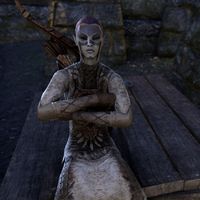 Shaali Kulun is a Dunmer Ashlander found just outside the gates of Ebonheart. She was recently injured by a vicious nix-hound, Varnag, which attacked her Ashlander caravan and took one of their guar, savaging her leg before getting away. She has put a bounty on Varnag's head, as well as two other vicious beasts terrorizing Stonefalls.

You'll find Shaali in a barn east of Ashfall Stables.

"We want no trouble, outlander. My injury doesn't keep me from stringing a bow."
How did you get hurt?
"A nix-hound attacked our caravan. He savaged my leg and carried off one of our guar."
Is that sort of thing normal in Stonefalls?
"Ha! No. Lately, we've sighted savage creatures in the wastelands. They're more than a match for our tribe's hunters.<br<Great rewards await any hunter who can bring them to ground."
I can do this, whatever these creatures may be.

You can then ask her some questions about your task.

"The first is Varnag, a feral nix-hound. The next is worse: Bleiger, a vicious and territorial bull netch.
Worst of all is a clannfear named Gurlisk."
Tell me about Varnag.

"He's the least vicious of the three, but look what he did to my leg!
We met him on the road southeast of Ebonheart. Our best guess is he escaped from a Goblin tribe … or ate them."

Where can I find Bleiger?
"He floats along the shore west of here.
Do not ask me the origin of his name. I assume it stems from the way netches float through the air."
What do you know about Gurlisk?
"Strange story, that. Summoned by an old conjurer who lived in the hills east of Kragenmoor. The conjurer died, but it stayed. No one knows why, and no hunter's ever tracked it to its lair."
Why are you visiting Ebonheart?

"We drove our guar here to trade.
The ashlands give our tribe many things, such as food and shelter. They aren't as generous with medicinal potions or steel."
Why not live in town, then?

"Ha! Even if we would have the housemen, they wouldn't have us.
They won't even let us within their walls to trade. We must stay outside, bedding with their animals."
Why won't they let you inside?

"Because they're heretics...or because we are. Whichever you prefer.
We hold true to the faith of our ancestors: the worship of Azura, Boethiah, and Mephala."
And the ... housemen, you called them?

"They believe the three elders of their "Tribunal" are gods.
We know the truth. The so-called Three are murderers and necromancers."
That's quite an accusation. Tell me more.

"Now? Here?
No, I've already said too much. I have no love for the housemen, but my people need their wares. Ask someone else."
Tell me about the creatures I'm hunting.

(loops back to the first response)

Speaking to her after killing one of the beasts:

"I'm not harboring any wild beasts nearby, as I'm sure you can see."

After the related quest:

"You'd be a great asset to any Ashlander tribe... if you weren't a heretic, that is."

This Online-related article is a stub. You can help by expanding it.
Retrieved from "https://dev.uesp.net/w/index.php?title=Online:Shaali_Kulun&oldid=1983448"
Categories:
Hidden categories: