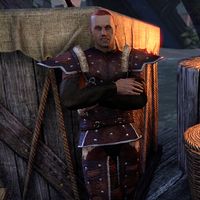 Shifty Tom is a Breton member of Blackheart's crew found within Blackheart Haven. He wants to leave Captain Blackheart and the pirate life and sees your arrival as an opportunity for freedom.

He can be first first met at the Haven's dock, where he will say "You there! I have a lucrative proposition for you." as you pass by him:

"You got past the front door. Impressive. Perhaps you're my way off this damned isle."
How's that?
"I work for Captain Blackheart and I want out. But can't just walk away. Not until I've taken care of something very important. But I'll need help."
What kind of help?
"As you've seen, the Captain's private army guards this island. I know my way around this place better than anyone, and if you help me grab two magical relics Blackheart's got, I'll help you secure the rest of his treasure."
Count me in.
"Welcome aboard! Let's get you disguised, and then it's onward to fortune and glory! And a bit of thievery."
How do I disguise myself?
"In the basket next to me is a uniform worn by Blackheart's minions.
Put it on, and you'll be as hard to spot as a spriggan in a tree."

"I love your enthusiasm, but I have my own way in.
Oh, and be wary of the pirates in the caves above. They're Blackheart's elite, his most trusted crew, and you'll find that they have... a different disposition than the seadogs out here."

Won't the pirates realize that I'm not one of them?
"Ha ha ha! Not hardly. There are so many that they can't tell each other apart.
The Sea Hounds, however, have noses keener than a man's eyes. They'll sniff you out and alert their masters, so avoid them if you can."

That's it? Avoid dogs?
"Yes. Well, no. There's also a brute named Iron-Heel who guards the inner haven.
He has a small army with him, and he'll step on your face if you're not careful. With his big feet."
I'll be careful. Let's go.

"I love your enthusiasm, but I have my own way in.
Oh, and be wary of the pirates in the caves above. They're Blackheart's elite, his most trusted crew, and you'll find that they have...a different disposition than the seadogs out here."

What's in it for you?
"Just a bit here and there. I'm looking for two artifacts in Blackheart's collection. If, by your graces, I can have those, I'll leave everything else to you."

The treasures you're after. Are they valuable?
"They are to me. But we're getting ahead of ourselves. We're not even inside, yet."

Can I ask you something else?
"Having second thoughts?
What did you need?"

Tell me more about Captain Blackheart.

"The Captain... is no longer the man I signed up with. He obliterates vessels he captures, after stripping them of wealth. None are left alive. Ever.
Where he's heading, I won't follow."

Tell me more about the island.

"This island serves as Captain Blackheart's base of operations.
His ship, the Black Death, is anchored here between assaults on the sea."

Tell me about Iron-Heel.
"He guards the entrance to the inner Haven. Huge bastard with an equally huge warhammer.
But I'm sure you'll do fine."

Once you have defeated Iron-Heel and made your way within the Haven, Shifty Tom will be there with some things he wants to discuss with you.

"You made it. Excellent! Now that we're inside, there's something you should know about me."
What is it?
"I've killed a lot of people. Everyone on Blackheart's crew has.
Before Blackheart brought us together, we were a desperate lot, and he knew it. Forced us to become monsters and savages."
How did he "force" you to become a murderer?
"It sounds like an excuse, but Blackheart has the means, and I want out.
But I'll need your help."

What's the plan?
"There are two enchanted skulls that Blackheart looted from a Skyrim-bound vessel.
Afterward, he soon … changed. He grew powerful. To defeat him, we need those skulls."

You think these skulls are the key to his power?
"I know they are. One is kept in the Haven at all times, held by Atarus, one of Blackheart's monstrous pets, just up ahead.
The second is kept by the Captain himself."

Let's go, then.
"I'm going to seal this door and make sure you're not followed. I will meet you once you've dealt with Atarus. Good luck."

And good luck to you.

If he is spoken to again he will say:

"As I said, I'm not a murderer by choice. And I want someone to know it.
I appreciate your help with all this. Now go! Atarus is just up ahead."
Tell us the plan again.
(?)

Once Atarus is dead and Atarus's Skull is retrieved, Shifty Tom will ask for the skull and the following happens:

He places the skull on ground.

Shifty Tom: "Finally, this nightmare will come to an end."

A group of Blackheart pirates will come out into the cavern.

Blackheart Strongarm: "Are you insane, Shifty? You'll kill us all!"
Shifty Tom: "That's the point, friend! This is no way for a man to live."

Shifty Tom then destroys the skull and the assembled pirates become skeletons and attack you both. Once the pirates have defeated you can speak to the newly skeletal Tom for an explanation: 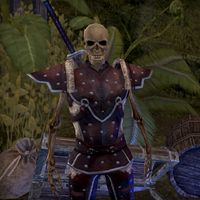 "So there you have it. My true form revealed."
You're undead.
"Indeed. I'm sorry for the deception, but I wanted this nightmare to end. To be free from this torment.
All the pirates you'll encounter in these caves are like me. We're part of Blackheart's original crew, and share his curse."

Have you been hiding anything else?
"There is nothing else, I swear.
I beg you to finish this by killing Blackheart and taking his skull. Destroying it will end this torment for the entire crew."

Destroying the skull will do what, exactly?
"The skull's dark power protects Blackheart from true death, and you will need me to destroy it if you can defeat him.
I'll meet you once you've bested him. I would face him with you, but I fear I would fall under his control again."

Very well. [Continues in below conversation.]

How did you get this way?
"When the Captain spoke to the cursed skull, it claimed to be the Daedric Prince, Molag Bal.
I thought it some trick, or jest, but then the skull growled an inhuman word and we came under its sway. I became the wretch you see before you."

How do we break this curse, once and for all?
"His skull is the key. It protects him from true death.
I can destroy it if you best him. Go through the Roost and face him if you're willing. I won't risk fighting him lest I fall under his control again."

Very Well.[Continues in below conversation.]

After this revelation, Shifty will direct you in the direction of Blackheart and tell you about the enemies you face on the way.

Very well.
"Hurry through the Roost upstairs to reach Blackheart's Cove. You'll find the Captain there."

What is the Roost?
"That's where the harpies are kept, tended by hags. The harpies protect Blackheart's home when he;s set anchor, and they are essential for his dominance on the open seas."

How so?/What purpose do those beasts serve?
"Ships at sea are usually not worried about anything but another ship. Blackheart's harpy flocks attack ahead of his ship, eviscerating his target while he moves on."

Why hasn't anyone caught on yet?
"Because the harpies' distraction alone is devastating. Few are alive to tell the tale. I remember boarding ships after the flying beasts only to sea them picking flesh off the bones of the crew."

Harpies? Hags? Anything else?
"Actually, yes. There's the Roost Mother. The hags tend to the harpies, and the Roost Mother rallies the hags.
She wields great power, able to conjure flames and travel great distances with a blast of feathers and magic. But I'm sure you'll be fine."

What purpose do those beasts serve?

While heading through the Roost you will come across Tom talking with a some harpies, who are harassing him as he cowers:

Shifty Tom: "Leave me alone, you she-demons! I've done nothing wrong."
Hag: "Oh but you have, Tom! You've been hiding from us. The Captain knows."
Shifty Tom: "Me? Never! I'm here, aren't I? I'll go see the Captain. We'll straighten this out. Just let me through, kind lady. Did I mention you look positively glowing today?"
(?): "You will indeed be seeing the Captain … Seize him!"
Shifty Tom: "No! Leave me alone. By the King's shaft, I'll scream!"
Roost Mother: "Rise my pretties!"

In the cove, Tom will be digging through a pile of treasures, commenting:

Speaking to him before the fight with Captain Blackheart:

"Oh! About time you arrived. Listen, Blackheart is down on the shore somewhere.
He likes to pace on the beach when he's on shore leave. And he doesn't find it funny when I point that out to him. Can you blame me for jumping ship?"

Once Captain Blackheart has been defeated, Shifty Tom will reappear, ready to put Blackheart down for good.

Shifty Tom: "You continue to impress, my friend! You've beaten Blackheart. Now to finish him for good."

He can then be spoken to to give him Blackheart's Skull and to complete Jumping Ship:

"Blackheart is dead, but he won't stay dead that way forever. Let's destroy his skull and prevent him from ever returning."
Here is Blackheart's Skull.
"Thank you. I will destroy the skull and rid the world of Blackheart's menace once and for all.
May fortune find you wherever you go, my friend."

He will then place the skull on the rock beside the captain's log and pulls out his greatsword. As he destroys the skull he will say:

Shifty Tom: "I never thought I'd be free of you, Blackheart."
Shifty Tom: "But the day has finally come, and I'll be rewarded handsomely for this."
Shifty Tom: "My new master has waited long enough, and I think it's time you died for good."
"It's been fun, Captain. No, it hasn't."

Then, once the sword strikes the skull, a plume of black smoke appears and Shifty Tom himself will die.