The UESPWiki – Your source for The Elder Scrolls since 1995
< Online: Places: Wrothgar / Arenas / Realms(Redirected from Online:Spiral Shadows)
Jump to: navigation, search

Untold thousands have tested their mettle against Maelstrom Arena―and failed. 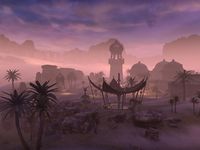 Maelstrom Arena is an otherworldly solo arena accessed from Wrothgar. Created by the Demiprince Fa-Nuit-Hen, it serves as a solo trial where one must defeat waves of enemies and bosses in nine different arenas.

Fa-Nuit-Hen and his Daedric subordinates will be spectating the games from the sidelines, and his assistant Tutor Riparius functions as a merchant between arenas. Each wave will have new sigils of defense, haste, healing, and power spawn, which can be used as temporary buffs. Once an arena is completed, one will be rewarded with a chest containing rewards and the option of travelling to the next arena.

New arenas progressively become more difficult, and completing the final arena on veteran difficulty will reward you with a Maelstrom Weapon.

The following sets can found in the reward chest at the end of each Maelstrom Arena round:

Round 1: Vale of the Surreal[edit] 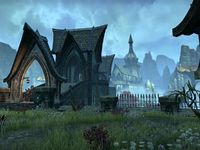 Vale of the Surreal

An arena themed after the Shivering Isles. The environmental hazards here are a blue orb that chases you around doing minor magic damage within a small radius as indicated by a red circle. You have to keep moving to avoid this. The water around the tree in the center also applies a heavy snare, so avoid it. Here you'll face various Daedric and undead enemies, such as:

The final boss of this arena is a Golden Saint named Maxus the Many. 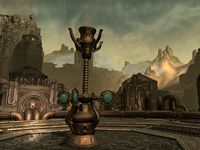 An arena themed after the Clockwork City built by Sotha Sil (also known as Seht), set under a clockwork sky. The environmental hazards here are a series of 6 spinning blades that run on 3 tracks across the arena. Getting hit by one will do moderate damage and apply a moderate bleed over time. The center pylon is electrified and standing near it will cause minor electric damage over time. If you stay in the center for too long, the pylon will explode throwing you out towards the edges of the arena, and possibly into a spinning blade. Hitting a switch located at the side of the arena will stop the blades from moving. It will also cause the pylon in the center to emit a healing aura (note that it will also heal any enemies that stand in it). The enemies here are primarily Dwemer constructs, such as

The boss of this arena is a trio of Dwarven Centurions, each named Centurion Champion.

Round 3: Drome of Toxic Shock[edit] 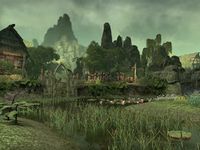 This arena resembles an Argonian village in Murkmire. The hazard here is the water around the three islands, which the Queen will randomly electrify throughout the fight. If the Stranglers pull you into the electrified water, you'll take heavy electric damage over time. Kill the Stranglers quickly to avoid this. Here you'll face off against Argonians, Lamia and other swamp-dwelling creatures like

The boss of this round is the leader of the lamia, aptly named the Lamia Queen. 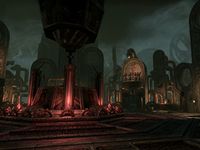 This round brings you back to the Clockwork City, but now in a chamber deep underground. The enemies are now a mix of Dwemer constructs and scavengers, such as

The final boss is a giant Dwarven Spider named The Control Guardian.

Round 5: Rink of Frozen Blood[edit] 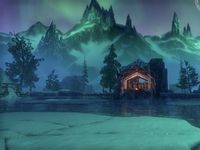 This arena is themed after the Wrothgarian Mountains. The arena is filled with frozen water that will damage you if you stand in it. Stay on the three ice platforms to avoid this. The enemies here include:

The final boss is a giant named Matriarch Runa 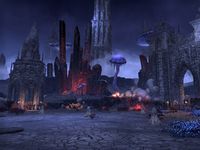 This arena is themed after Mephala's realm - the Spiral Skein. Here, five obelisks will emit a glow that repels spider swarms, but these obelisks may be covered with webs spun by enemies. To remove them, you have to kill a Venomous Hoarvor near them, causing them to explode with acid. Alternatively, if a hoarvor is not killed near an obelisk, it will leave behind an acid sac. That sac can be thrown (using a synergy) at webbed obelisks to free them. If all 5 obelisks are freed, they will stun all enemies (including bosses) for 10 seconds, before being covered in webs again. Freeing the obelisks is necessary during the final boss fight, as each obelisk left covered will increase her damage done. The enemies faced are various Spiderkith and insects, such as:

The final boss is a Spider Daedra named Champion of Atrocity. 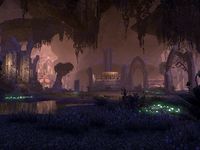 This arena is themed after an Ayleid ruin in Murkmire. The environmental hazards here are poisonous plants that will explode when you go too near, or if they are forced to explode by the Argonian Venomcallers. The only way to cleanse the poison is to stand in the green pools on either side of the arena. The enemies encountered here are

The boss of this arena is the Argonian Behemoth. 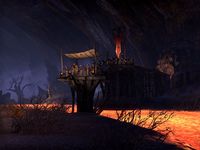 This arena takes place in a volcanic cavern deep underground. The environmental hazards here are frequent lava eruptions that will land on the arena, as indicated by red circles. There are also 3 Warding Stones that have to be broken occasionally, as any enemies indicated with a blue glow will be immune to damage until all stones are broken. The enemies faced here are:

The final boss is a Dremora named Valkyn Tephra. 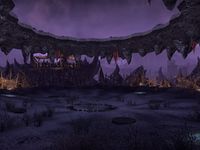 The Theater of Despair is the final round of the arena, and is supposedly based on Mehrunes Dagon's Deadlands. The hazards here are blue wraiths that float across the arena. Touching one will cause cold damage and slow, while touching a golden one provides a boost to your defenses. Touching 3 golden wraiths will allow you to cast the "Spectral Explosion" synergy, that removes all wraiths and stuns all enemies for 10 seconds (including bosses). Additionally, some Dremora will empower a rune in the center of the arena, which will eventually cause a giant Bone Colossus to spawn. The enemies are:

The final boss of the arena is a Dremora named Voriak Solkyn.

This Online-related article is a stub. You can help by expanding it.
Retrieved from "https://dev.uesp.net/w/index.php?title=Online:Maelstrom_Arena_(place)&oldid=2054860#Round_6:_Spiral_Shadows"
Categories:
Hidden categories: