The UESPWiki – Your source for The Elder Scrolls since 1995
< Online: Places: Murkmire / Caves / Unmarked Locations
Jump to: navigation, search

Revered by some, but dreaded by most, the Ree-An-Wo—or as it's rendered in Tamrielic speech, the Swallowed Grove—is said by the Argonians to be a place "where dreams walk." 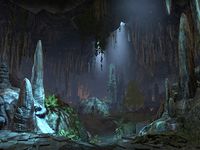 Swallowed Grove is a secluded cave found in Murkmire. According to Famia, the grove consists of subterranean jungle, formed from a sinkhole. Deep within the grove is an ancient Argonian ritual chamber, called the Dreaming Nest.

The following characters will only appear in the Swallowed Grove during their respective quests:

This Online-related article is a stub. You can help by expanding it.
Retrieved from "https://dev.uesp.net/w/index.php?title=Online:Swallowed_Grove&oldid=2089521"
Categories:
Hidden categories: