The UESPWiki – Your source for The Elder Scrolls since 1995
< Online: Places: Eastmarch / Smithies
Jump to: navigation, search 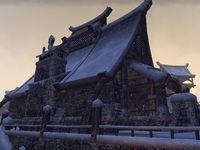 The Anvil & Pauldron is a smithy in central Windhelm. Three different vendors can be found inside the craftworks; a blacksmith, clothier, and leatherworker. A crafting station for their profession can be found by each vendor, meaning that there are two blacksmithing stations and a clothing station in the building.

Geraud Maviniele works at the smithy. Two other people can be found in the crafting hall; the Dunmer noble, Turril Omalor and Dalen Steelhand.

This Online-related article is a stub. You can help by expanding it.
Retrieved from "https://dev.uesp.net/w/index.php?title=Online:The_Anvil_%26_Pauldron&oldid=1879176"
Categories:
Hidden categories: