The UESPWiki – Your source for The Elder Scrolls since 1995
< Online: Quests: Malabal Tor / Side Quests
Jump to: navigation, search
Falinesti Summer Site is a legendary seasonal location for the Wood Elves' Walking City. But the city hasn't been seen in Tamriel for centuries. Now, something is happening at the Summer Site.

To start this quest, talk to Tharuin the Melancholy at the camp west of the Dra'bul Wayshrine. She tells you that the Walking City is still missing and advises you to leave while you can. A few days ago, while waiting for the return of the city, she and Barothias saw flashes of lightning in the valley. One of them struck Barothias, and the closer they got to the site, the harder it was to breathe. You offer to check out the valley, and she tells you about peculiar standing stones that weren't there last year.

Head northwest to explore the valley. You see a purple glow coming from a stone arch, and when you approach it, a projection appears. She appears to be trying to save the city using magicka. However, she says there is not time, and tells you to meet her in "the small cave past the menhir, across the planks." She disappears, along with the purple glow. 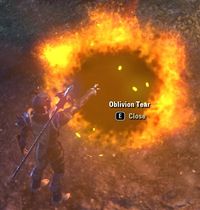 Walk through the arch and west across the wooden bridge into the cave. At the bottom of the cave is a Daedric portal and Farandare, the source of the projection. Talk to her. She claims she has spent her lifetime trying to rescue the city and may be able to succeed with your help. She believes the city was trapped in Oblivion and has found a way to open a portal large enough to rescue it. There are small, almost imperceptible Daedric tears at each of the standing stones. Left over from her early experiments, they are letting Daedra in. You should close all four of them. However, the Daedra will try to open a larger portal. You'll need to fight through them and close all the tears, then meet her at her laboratory in a northwestern cave. Tell her you are ready to start.

When you leave the cave, a pool of fire appears underneath the stone arch where you first saw the projection. Defeat the two daedra who appear when you get close, then go north into the cave.

Farandare is casting a spell at another similar pool of fire. Talk to her when she finishes. You tell her that it looks like one of the portals the Daedra were coming out of, and she realizes that the Daedra must be guarding the city. You'll need to clear a path for the city. Tell her you're ready for whatever comes through the portal.

Once you do so, you immediately have to face Tulu, a daedroth. Talk to Farandare once you defeat it. She wants to try again. You can tell her to do more research or that she will die if she tries again and that you won't help her. If you choose to tell her to do more research, she admits you're right but plans to try again. You can wish her good luck with her research or tell her you won't help (the same option as before).

This Online-related article is a stub. You can help by expanding it.
Retrieved from "https://dev.uesp.net/w/index.php?title=Online:The_Summer_Site&oldid=1871924"
Categories:
Hidden categories: