The UESPWiki – Your source for The Elder Scrolls since 1995
< Online: Quests: Aldmeri Dominion / Auridon
Jump to: navigation, search

I'm now a full member of the Veiled Heritance. I've been told of a grand hall where their leadership council meets. And they are meeting with the Veiled Queen herself!

After Alandare confirms your membership, she will have another task for the Veil's newest officer—presenting yourself to the Council. And luckily for you, the Veiled Queen will be speaking to her followers about the cause.

"You're a full member now. And you're in luck. The Veiled Queen herself will be speaking to the cause."
Where should I go?
"The Veiled Council meets in the grand hall. It's north of here, near the top of the island."
And you said the Veiled Queen is here?
"No, she's not here. She needs to stay safe, hidden. Uses a spell to speak with us by projection.
Go report in with the council. Present yourself and be known."
Looking forward to it. 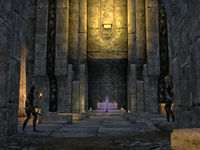 Fight your way through the Keep

The entrance to the Veiled Keep is nearby, once you enter, you will hear a familiar voice.

High Kinlady Estre: "Search the recruits! One of Ayrenn's agents is in disguise."
Nenaronald: "Damn it, they're here!"

Your cover has been blown, furthermore, your Earring of Altmer Nobility will stop working. When you enter the first hall, you will see a projection at the other end, but first you will need to deal with the hostile Veiled Heritance members before you can go further into the keep. 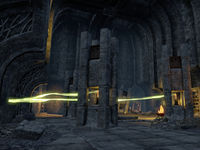 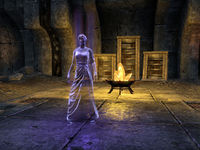 "I am the Veiled Queen!"

Once you have defeated all of them, continue searching the keep. To enter the second chamber you will need to press the button with the large blue stone near the door. When you enter the second chamber, the ceiling will begin to shake and debris will fall to the floor and while cause damage if they hit you. Additionally, the door will be magically locked with crystals. Interact with the three yellow crystals to unlock the door.

When you start, the projection will appear again and this close up, there is no mistaking her—the Veiled Queen is Estre and she will freely admit it as she berates you and reveals her true feelings towards Ayrenn.

High Kinlady Estre: "You, peasant! You think yourself clever. Did the filthy cat give you that little bauble? Or did Ayrenn herself get her hands dirty?"
High Kinlady Estre: "Did she really think she could sail home, and we'd all bend a knee? As she invites mongrels and beasts to cavort in our cities? Deluded fool!"
High Kinlady Estre: "No matter. With Mehrunes Dagon's aid, I will dispose of the false queen and rise as true leader to our people! I am the Veiled Queen!"

After her rant and admission that she is trucking with Daedric Princes, Estre's projection will disappear again. When the gate is unlocked you can enter the third room. In the third room, you will finally meet the Veiled Council—Ondicantar‎, Endartirinque, and Nenaronald—as there is no where else for them to fall back to.

At that, the only reply you can give is terminal violence. Endartirinque is the weakest of the trio but has ranged frost magic, while Ondicantar‎ and Nenaronald a similar in strength. However, out of the latter two, Nenaronald is the more dangerous opponent, particularly his cleave attack. Once you have slain the council, you will need to leave the island and report to Razum-dar in Skywatch immediately.

Head through the northern door to leave the keep. As you are no longer disguised, the island will be on alert and the formerly neutral Veiled Heritance members will now be hostile towards you. Make your way back to the dock where you first arrive and take the boat back to Auridon and Skywatch. 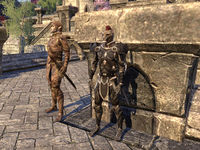 Razum-dar can be found outside the Skywatch Manor and back in his uniform. He has been wondering where you went and was getting worried, you will waste no time in getting to the point.

"Ah, good. Raz was beginning to worry about you."
Where's High Kinlady Estre?
"Calm yourself, friend. She's inside with the Queen. They're practicing for the Thalmor ceremony tomorrow. No need to worry."
You don't understand. Estre is the Veiled Queen.
"Truly? You are certain? If you're mistaken, accusing her—"
Raz, you have to trust me. I saw her speak to the Veiled Council.
"Then we end this. Come with Razum-dar!"

He will swiftly believe you and will rush inside the Manor.

Once inside, he will approach Ayrenn and Estre on the dias and announce that he has important news for the Queen.

Razum-dar: "My queen, this one apologizes. We must speak with you at once."
Queen Ayrenn: "Razum-dar? What's going on here?"
High Kinlady Estre: "What is the meaning of this? Who let that cat in here?"
Razum-dar: "Our friend here will tell the tale." 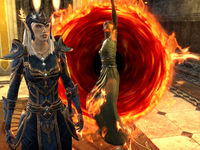 The ball is now in your court and you will have to tell Ayrenn that her sister-in-law has been plotting her death. She will initially be skeptical.

"Speak quickly, please. This could be very bad for both of us."
My queen, I'm sorry, but you're in danger here.
"I know. That's why Raz asked you to investigate the Heritance."
No. Your Majesty. Estre is the Veiled Queen.
"The Veiled … surely this is a jest?"
I defeated the Veiled Council and met their leader. Estre used magic to contact them.
"Estre doesn't even know magic!"
<Estre teleports away magically>
"Estre?"
She escaped, your Majesty.
"It's all right, my agent. You've done the Dominion a great service today. With Estre exposed, the Veil falls. We'll investigate her staff, her guards. We'll bring them to ground.
You have the thanks of a grateful Queen."

You will receive some gold, the Queensguard Chestplate and a Skill Point. While the hunt for Estre begins, Queen Ayrenn will instead have you scout out Dawnbreak.