The UESPWiki – Your source for The Elder Scrolls since 1995
< Online: Quests: Daggerfall Covenant / Betnikh
Jump to: navigation, search 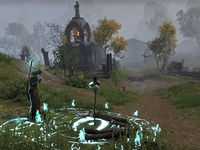 To start this quest go west from Stonetooth Fortress until you get to the Grimfield wayshrine then go around the rocks to the south and talk to the guard Rozag gro-Khazun. He tells you if you want to kill cultists to start with the crypt in the center. From your location go southeast fighting through the cultists and undead as you go until you reach the crypt which has a skyshard to the right of it. Go inside and talk to Frederique Lynielle. She tells you to take the Staff of Arkay, charge it and then use it against the abominations summoned by the necromancers. Pick up the staff at her feet if you recruited Crafty Lerisa she'll show up when you grab it and gives you a Bloodthorn cultist disguise. Go back outside now and search the area for some Bloodthorn cultists standing near blue ritual circles kill them to get some motes. When you have six energy motes go and find Frederique near her tomb south of Grimfield wayshrine and speak to her. She now wants you to draw three abominations out and destroy them they are the Abominations of Hate, Wrath and Fear. Go west of her tomb to find a portal activate it to bring out the Abomination of Fear. Defeat it and then go south and activate the portal to summon the Abomination of Hate. Kill it and then go north past where you fought the Abomination of Fear until you come to the final portal which summons the Abomination of Wrath. Defeat it and Frederique will tell you to meet her at the west end of the graveyard. Go southwest from where you are when you come to rocks that block your way go south past the tomb and then west. Talk to Frederique and she'll tell you that King Renwic wishes to repay you.

Traveling To The Past[edit]

You have the choice to kill the prisoners to question their ghosts and get the two required answers easily or ask the correct questions to the respective Breton:

After you finished questioning, talk to War Chief Yzzgol. Now turn the runestones on either side of the door and enter. Confront King Renwic and watch the scene then go through the portal to return to the present. Talk to King Renwic for your reward.

This Online-related article is a stub. You can help by expanding it.
Retrieved from "https://en.uesp.net/w/index.php?title=Online:Unearthing_the_Past&oldid=1929783"
Categories:
Hidden categories: