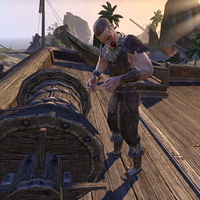 He is one of the sailors you need to save from the Maormer ship to stop their ritual. When you free him with the lodestone, he exclaims "They won't kill me today!", and escapes.

After his rescue, he can be found working on the top deck of the ship, singing the chorus of Over The Seas.

This Online-related article is a stub. You can help by expanding it.
Retrieved from "https://dev.uesp.net/w/index.php?title=Online:Virkvild&oldid=1992340"
Categories:
Hidden categories: