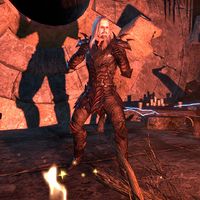 Vorenor Winterbourne is a Nord vampire found within Spindleclutch II, where he serves as the third and final boss that players must defeat.

His unique drops are the Axe of Sacrifice, the Vampiric Scepter, and helmets (in random weight and trait) from the Blood Spawn set.

A basic melee attack that does moderate physical damage. If taunted, the boss will be forced to use this attack on the tank only.

The boss shoots a red beam at a random player. This attack does moderate physical damage over time.

The boss places a pool of blood under a random player. This attack does high physical damage over time as indicated by a red circle. The initial tick happens almost immediately, thus the healer should ensure that the party is fully healed before this attack is performed.

The boss teleports to each player and slashes them, doing high physical damage. This attack can be blocked to reduce the damage taken.

The boss sucks blood from the captives around the room, healing himself over time. At first, only one captive will be used, but as the fight progresses, more and more captives will be involved, increasing the magnitude of the healing done. To prevent this, players may kill the captives to stop his healing. Alternatively, if damage is good enough, players can choose not to kill the captives, and instead kill him using pure damage. Doing so will net players an achievement.