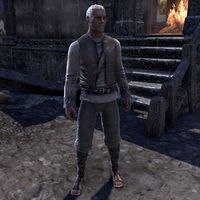 William Nurin is a Breton farmer at his farm north of Koeglin Village. After a recent Daedra attack on his farm, he will have gone missing and his daughter Ganise will want some helping looking for him, despite his wife's insistence that he is likely dead.

After some investigating you will find out that William was actually abducted to be sacrificed for Rosalie's initiation into the Supernal Dreamers. He can be found tied up on an altar while Rosalie and Hark Sentulus perform the rituals. Once they have been killed, you can free and he immediately run off, desperate to find his daughter:

William Nurin: "Where's Ganise? I have to find her!"

When you arrive back at the farm he can be found with Ganise.

"I just can't believe my Rosalie would … it's just unthinkable.
I owe you for my life, and for my daughter's welfare. Though she wants to thank you herself."

After you have spoken with Ganise back at the farmhouse, William will still be shaken by Rosalie's betrayal but will ask for your further assistance.

"To think I shared a bed with that woman and she nearly killed me … I suppose she may have been under the infuence [sic] of that crazy cultist, Sentulus.
That reminds me. I hate to ask anything else of you, but I think there may still be some danger."
What danger?
"Well, the scamps running around here for one thing, but I have reason to believe there could be worse things coming if we don't act fast.
That crazy Sentulus was telling Rosalie about these portals he had opened up around the farm."
We should destroy these portals.
"My thoughts exactly, and I'd like to go out and do it myself ….
I wouldn't want Ganise to lose both her parents. I think it might be smarter if you go. If you're willing, that is."
I'll destroy the portals.
"If you can just take care of those portals, I'm sure the rest of the scamps will wander off eventually."

Once you have destroyed the four portals around the farm, you can return to William.

"Were those Daedra death screams I heard? Music to my ears.
And you destroyed those damnable portals too. I think now we'll be safe."
I think you're going to be fine.
"It's hard to believe that someone I don't even know would go so far out of their way to help us.
There's hope now, at least. Thank you."

"I guess the next thing is start making plans to rebuild. Times like these I wish we had more children—a larger family, you know?
I guess there's always the future."
You know, there is Ingride Vanne ….
"My neighbor? Are you saying what I think you're saying? I mean, Ingride's nice, but she's ….
Well, I always did think she was rather pretty, and she is a widow. I think maybe I'll just have to pay her a visit. Thanks for the suggestion."

This Online-related article is a stub. You can help by expanding it.
Retrieved from "https://dev.uesp.net/w/index.php?title=Online:William_Nurin&oldid=2113739"
Categories:
Hidden categories: