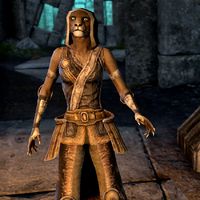 Zahra is a Khajiit treasure hunter and former member of the Mages Guild found in Gandranen Ruins. She is searching for an Ayleid artifact called the Crown of Ascension.

After helping Zahra find the Crown of Ascension, she can be found at The Blasted Breton inn in Alten Corimont. She tells you that the crown was appraised by Captain One-Eye's associates and that there is an interested buyer for it in Morrowind.

"Ah, my friend! Captain One-Eye's compatriots had the Crown of Ascension appraised! Its enchantments are much diminished, but still worthy of study. They even found a buyer in Morrowind!
Such songs they will sing of us! May Khenarthi's breath carry them far and wide!"

This Online-related article is a stub. You can help by expanding it.
Retrieved from "https://dev.uesp.net/w/index.php?title=Online:Zahra&oldid=1978504"
Categories:
Hidden categories: