The UESPWiki – Your source for The Elder Scrolls since 1995
< Skyrim: Places: Worldspaces
Jump to: navigation, search 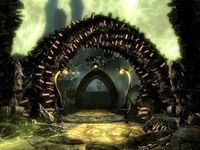 It is an endless library where all forbidden knowledge can be found. Stacks of books clutter and can reach as high as the illuminating green sky. You can enter the realm via Black Books found in various dungeons throughout Solstheim. The realm is inhabited by Daedra called Seekers and Lurkers. Tentacles constantly breach the acidic dark waters and sometimes whip at you, causing a significant amount of damage if they manage to hit you. The acidic waters with the tentacles are also corrosive and cause damage if stepped in.

Some areas are divided into "Chapters", and you need to find the book to access the next chapter to progress. Each chapter does not need to be accessed in order to get to the end, some chapters may be skipped entirely, and in others you will need to access chapters non-chronologically.

There are seven accessible areas of Apocrypha, each associated with a Black Book:

For historical information on the Apocrypha, see the lore article.