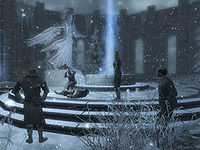 College members mourning the death of the Arch-Mage

As you regain consciousness after witnessing part of the battle between Ancano and the Arch-Mage Savos Aren, Mirabelle Ervine will be standing above you, telling you to get on your feet. Gather your wits and find her visibly shaken and upset. Tell her you feel ok, and she will tell you that Ancano is doing something with the Eye of Magnus and that the Arch-Mage is missing. This will begin the quest. Head to the College's central courtyard where you will find the Arch-Mage's body and a group of mages. Tolfdir will approach you and inform you that whatever killed the Arch-Mage has also affected the town of Winterhold. He asks you to go there and save the town.

Cross the bridge, where Faralda and Arniel will be waiting. Faralda will inquire about the situation. Explain that Winterhold is in imminent danger and proceed to the town. Faralda and Arniel will follow and assist you in the battle that awaits. You will find the town has become infested with a swarm of magic anomalies—fast moving balls of energy whose attacks deliver frost damage. They explode upon defeat, leaving behind soul gems in their "ghostly remains". Faralda and Arniel prove valuable allies in this battle and, with their help, you defeat the ten anomalies and secure the town. Arniel will remain in the town while you return to the College to report back to Mirabelle.

When you find Mirabelle, she will tell you that she and Tolfdir are trying to keep the Eye contained, but are in dire need of the Staff of Magnus. When you tell her that you must venture to Labyrinthian for the staff, she softens a bit from her concern and grief. She intimates that Savos Aren had just recently given her a mysterious torc, cryptically telling her that she would know what to do with it when the time came, and she believes it was meant for you. She also gives you Savos Aren's amulet to aid you on your journey, believing that you will be better served by it. The Staff of Magnus quest begins here.