The UESPWiki – Your source for The Elder Scrolls since 1995
< Skyrim: Creatures
Jump to: navigation, search 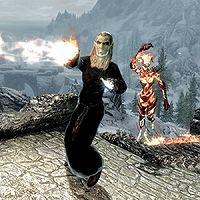 An atronach under the command of a conjurer

Daedra are creatures and sentient beings that can be found across the vast expanses of Oblivion. Only two of these types of Daedra appear in Skyrim, however: the atronachs and Dremora. Despite the lasting ramifications of the Oblivion Crisis, conjurers across Tamriel could not resist the allure and power associated with summoning Daedra and attempting to command them. Many of these summonings are successful and those Daedra serve their masters without fail, but even more summonings go wrong and result in unbound beings turning on their masters.

There are far fewer unbound "wild" Daedra in Skyrim than there were in the previous two Elder Scrolls games, Morrowind and Oblivion. Narratively this makes sense - Daedra-worship was always part of the Dunmer culture and was thus comparatively common in Morrowind, even during the reign of the Tribunal, and there were still many Daedric ruins there where unbound Daedra of all levels from Scamp to Golden Saint could be found: but there are no such ruins and no such cults in Skyrim at all. And since the Oblivion Crisis (and the closure of the Oblivion Gates which seems to have mostly shut unbound Daedra out of the mortal plane), the world has largely - and probably justifiably - turned away from Daedra-worship, with the exception of those still revered by the Dunmer. Even among them, only Azura retains her open popularity - even Boethiah and Mephala, also revered by the Dunmer, have suffered by comparison: and the Orcish cult of Malacath still persists in their strongholds, though not so much among Orcs who live in the wider world. Other Daedra Lords seem to have faded away to a last few cultists meeting in secret - some of them diseased (Peryite) or no longer even alive (Clavicus Vile's dozen or so vampire cultists). Molag Bal has fared perhaps worst, having no remaining actual worshippers, and being kept in the memory of Skyrim only by a Boethiah cultist who comes to mock him with a hatred so strong that it actually sustains him by acknowledging him.

Even summoned Daedra are not what they used to be: a caster can no longer soul-trap his own summoned Atronachs or Dremora to fill soul gems, although he can soul-trap the summoned beings of another caster.

All Daedra that appear in Skyrim are categorized here. For Daedra added by Dragonborn, see this page.

Atronachs are intelligent elemental Daedra that can be called forth from Oblivion to serve a conjurer in battle against his or her foes. Atronachs are all immune to paralysis, cannot be reanimated, and cannot be made invisible by any means. Dremora are manlike beings that are treated as NPCs in-game rather than as creatures, and therefore have stats, resistances, and perks more suited to that, as detailed on their page.

Flame atronachs appear as female humanoids engulfed in flame, wearing intricate, black, metal armor. Though they are the weakest type of atronach encountered in Skyrim, they are extremely agile and reasonably proficient in close combat. Flame atronachs prefer to use their flame-based magic at a distance and will actively try to avoid melee combat if at all possible. While typically found in the employ of enemy spellcasters, the player can also conjure them and use them in battle. As these atronachs levitate, they therefore possess the innate ability to walk on water. When slain, unbound flame atronachs will drop Fire Salts, an alchemical ingredient. 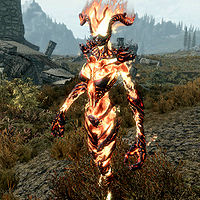 Frost atronachs are Daedric constructs of solid ice that resemble over-sized humanoids. They have a long melee reach and their attacks usually stagger targets, but they are entirely lacking in ranged options. Still, once caught in melee range of them, their chilling cloak slows targets and prevents easy escape. They can be summoned by you, and are occasionally used against you by enemy conjurers. All frost atronachs have the innate capability of breathing underwater, which is relevant because they are also the only variant of atronach present in Skyrim that does not hover above the ground. Upon death, unbound frost atronachs will have Frost Salts on their remains that can be looted. 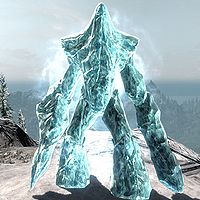 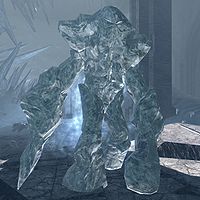 Storm atronachs are Daedra of elemental shock. They appear as a cluster of rocks quickly revolving around an unseen, electrified center of mass. Storm atronachs can be encountered as a hostile enemy, usually summoned by an enemy caster, or you can summon them to aid in combat. Like flame atronachs, the storm atronach hovers and thus has the Waterwalking ability. In their destroyed remains, you will find Void Salts that you can take.

It is worth noting when considering storm atronachs for summons that storm thralls lose the ability to cast the powerful Chain Lightning spell when compared to the storm atronachs themselves. In this case, it may be wiser to simply recast Conjure Storm Atronach as needed for the more powerful summon. 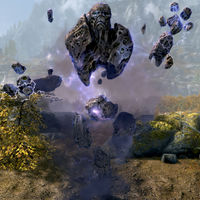 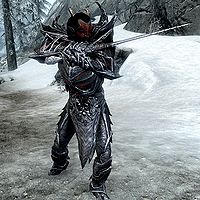 Dremora, like atronachs, hail from the planes of Oblivion, but unlike atronachs they possess a malicious sentience and directly serve the Daedric princes in their pursuits. These ruthless beings are obsessed with destruction and have their own variants and ranks. They can wear Daedric armor, have powerful fire spells, wield blazing weapons, and be among the most difficult of foes to face down. Dremora can be summoned by you with the Conjure Dremora Lord spell, and are a component in many quests. All specific information related to Dremora, including their ranks, roles, and stats, is captured in greater detail on the Dremora page.

Some quests that require fighting or interacting with Daedra to complete include:

The following books contain direct discussion on the different types of Daedra that can be encountered.