The UESPWiki – Your source for The Elder Scrolls since 1995
< Skyrim: Skills: Magic
Jump to: navigation, search

Enchanting is the ability to add magical effects to weapons, armor, and clothes. Increasing this skill increases the amount of charges available when creating an enchanted item and the quality of the enchantment that can be placed on that item. The Enchanting skill tree has a total of 9 perks, requiring a total of 13 perk points to fill. Each level in the Enchanting skill increases the strength of enchantments in a quadratic fashion to a maximum of +25% effectiveness at level 100. Which enchantments can be applied to a particular item varies by item type.

In-game Description: The more powerful the enchanter, the stronger the magic he can bind to his weapons and armor. 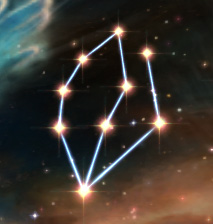 Soul Siphon
Enchanting Perk Tree
^1Only affects new enchantments. Also affects new enchantments on clothing and jewelry despite only specifying armor in the description.
^2Specifically, this affects Fortify Health, Regenerate Health, Fortify Magicka, Regenerate Magicka, Fortify Stamina, and Regenerate Stamina.
^3Allows you to add a second enchantment to an item only at the time of enchanting and for a single soul gem. Already enchanted items cannot be given a second enchantment.
^4This treats all Soul Gems as having 250 greater capacity when used for recharging.
^5Does not apply to kills made with staves. 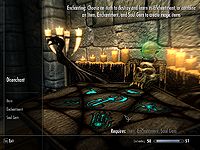 To use the enchanting skill, you will first need access to an arcane enchanter. These stations enable you to both disenchant items that you already have in order to learn their enchantments and create newly enchanted items using the enchantments you currently know.

To disenchant an item, all that is necessary is an item with an enchantment you have not yet learned. Open up the enchanting interface at an arcane enchanter, select the option for Disenchant, and select the item you wish to disenchant. Items available to be disenchanted will appear white, while items with enchantments that you already know will appear greyed out. Note that many items, such as staves, artifacts and even most unique items, cannot be disenchanted and their enchantments cannot be learned; they will not even appear on the disenchanting list. A list of all available enchanting effects as well as which item types can be enchanted with which effects can be found here. Keep in mind that when you disenchant an item, it will be destroyed and you will only learn the type of enchantment that it contained; the magnitude is irrelevant for purposes of disenchanting.

Three components are necessary for enchanting an item with a new effect:

When enchanting an item, you can rename it. The name you choose appears in all capital letters in the enchanting interface, but it will use the capitalization you specify in the inventory and favorites menus. The name is limited to 32 characters. Renamed items retain their IDs at the lower level of the game; a script that checks for possession of an item will still work even after the item has been renamed. Unlike in the rest of the enchanting process, time is paused while the rename option is open, which is handy if you are using a short-lived Fortify Enchanting potion and need time to look over the available enchantments for the item.

Once you have confirmed all of the features of the item you wish to create, select the Enchant option from the menu to complete the process. 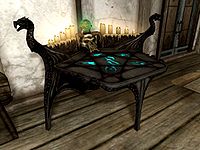 To create the most powerful enchantments for your items without taking advantage of glitches, you will need to have a skill level of 100 in both Alchemy and Enchanting. In the base game, no Powers or equippable items exist that Fortify Enchanting, but with the Dragonborn add-on, there are three very important powers to acquire to maximize the potency of your enchantments:

Once you have these powers, use the procedure described below to improve the quality of the enchantments you can apply. If you do not have Dragonborn, just follow the same steps without the Dragonborn-specific elements.

This process has diminishing returns, with the most powerful potion of Fortify Enchanting that can be made, factoring in all possible boosts, being +49% (40% without Vampire/Necromage). Once these potions are made, drink one, ensure that you have all necessary powers (Seeker of Sorcery, Ahzidal's Genius), and then enchant your gear and you will be creating the strongest enchantments possible without taking advantage of glitches.

The following races have an initial skill bonus in Enchanting:

A few basic tips to increasing your Enchanting skill are as follows:

One achievement is related to enchanting: