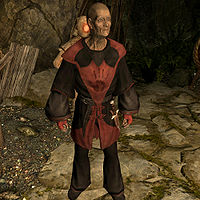 Festus Krex is an elderly mage found in the Dark Brotherhood sanctuary west of Falkreath.

He lives a quiet existence in the Sanctuary, getting up at 8am. He'll then spend the rest of the day either sitting around, using the alchemy table or arcane enchanter, or conversing with his fellow assassins. Then, at midnight, he'll head to bed for some sleep.

When you greet him, he'll be very clear on his preferred method of killing, "There's too much of an obsession these days with knives and arrows. You can kill someone just as easily with a well-placed spell.", "You like creepin' around in the shadows? Magic'll work just as good there as anywhere else.", and "Nobody ever expects a fireball from the darkened corner." He will also recommend you speak to Babette should you need potions, "Talk to Babette about potions. She's the creepy little girl - can't miss her." Lastly, he'll show just how much he cares when saying "Yes, yes. I'm your brother and I'm supposed to greet you respectfully. So "hello." There, satisfied?" If he notices you sneaking near him, he'll say, "This how you get your thrills? Feeling up an old man?" When asked to tell something about himself, he'll talk about his background with magic, "Hmph. I like to say I was born with a wand in my hand. Well, not literally - you can see how painful that would have been for mother. But I was a prodigy! Casting simple spells by one, completing complex incantations by three. Resurrecting corpses by seven! Ha! When I was thirteen I accidentally burned down the family home. A bit of lightning gone awry. Ah, but soon after I mastered my gifts. Completely. I went on to teach at the College - left after two years. Too simple. Too safe. None of them truly understood the glory of the Destruction school..." He's very pleased with the arrival of Cicero and the Night Mother, saying "Their arrival is the best thing that's happened to this Sanctuary in years. Astrid is an effective leader, but we've been rudderless for too long. Scrounging for contracts, abandoning the Tenets. The Dark Brotherhood has been reduced to a group of common cutthroats. Frankly, it's embarrassing." When exiting conversation, Festus will say either "Remember, fireballs. You can never go wrong.", "Go, incinerate some poor bastard for me." or "Yeah, yeah. Goodbye, kill lots of people, Hail Sithis, and all that."

When you first enter the Sanctuary, Gabriella will be taking part in the following conversation: 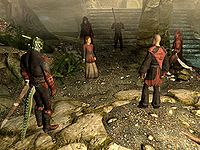 When you first talk to him, he'll appear very uninterested, "Yes, yes, you're the new Family member. Let's make this easy - consider me the cranky old uncle nobody talks to. You go your way, I'll go mine." From there on you'll get three responses, regardless of which you pick, Festus will shrug you off with a blunt "Hmph."

Once you return to the sanctuary, you'll find Veezara injured on the ground. Babette will be tending to him: 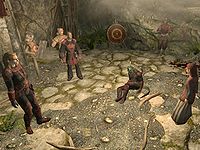 "There's been an incident"

Babette: "Just try to relax, Veezara. Let the elixir do its work. You'll feel better, shortly."
Veezara: "Achh... Thank you, dear. You are most kind. The jester's cut feels as bad as it looks, I'm afraid."
Astrid: "Damn it, this never should have happened! We knew better. We knew better, and still we let our guards down. Agh!"
Festus Krex: "I'll admit, even I'm having a hard time disagreeing with you..."

Speaking to Festus after this scene will have him say "Boy, did you miss all the excitement." Once you find evidence to go and hunt Cicero down, Festus will encourage you by saying "Burn that little jester alive."

At the end of The Cure for Madness Astrid will refer you to Festus by saying: "There's just one more target before we strike out at the Emperor. Have you by chance heard of the "Gourmet"? Read his cookbook? It's become quite a phenomenon. The Gourmet is scheduled to cook for the Emperor at a special dinner. You'll kill him, steal his Writ of Passage, and assume the roll [sic] of master chef. Festus has been spearheading this part of the assassination plan. He's close to uncovering the identity of the Gourmet. You should report to him."

You can also ask for some for info on his book ""Uncommon Taste." It was published a few years ago, and became a sensation throughout the Empire almost overnight. The recipes were hailed as both practical and decadent. I've made a few of the Gourmet's dishes myself, actually. His roast mutton with Redguard berry sauce is to die for. But his chocolate pate gives me the runs." Asking him if the Gourmet is in Skyrim will have him say "Yes. Gaius Maro, on orders from his father, arranged for the Gourmet to come to Skyrim months ago. To serve as the Emperor's personal chef. But the Emperor canceled his journey at the last minute. Maro was smart, kept the Gourmet around, in case things changed. And so, the Gourmet has remained in seclusion, somewhere in Skyrim... on indefinite hold. Probably feels like a prisoner. But you'll fix that."

If you speak to him after this, he'll just remind you of your orders: "Come now, you've got your orders. What else could you possibly need?", and "All you've got to do is find and kill one lousy chef. The clock is ticking..."

After you've finished off the Gourmet and returned to Festus, he will say "So, the prodigal murderer returns. And the Gourmet?" You will the inform him that the Gourmet is dead, but his response will differ based on the optional you chose to complete or didn't complete. If you did everything perfect, his response will be "So I gathered. It seems a certain Orc has disappeared. Which means you not only killed the Gourmet, but disposed of the body as well. You've got the Writ of Passage too, I see. Splendid, splendid... Ah, and word has come in from Markarth that the keep's cook has met an untimely demise. You performed your duties to the letter." You will gain three responses once more, all of them leading to Festus giving you your bonus and same rarely-seen respect "Hmph. I was wrong about you. I see that now. Maybe we all were. Here's your payment. And... a little something else, as well. From me. Consider it my way of apologizing. For being so damned curmudgeonly! It's called the Nightweaver's Band. I wore this for years. I want you to have it now. It'll give your magic and sneakiness some much needed "oomph." Now, you'd better get a move on and see Astrid. It's time! Time for the final stage of this grand and glorious operation."

If you didn't hide the body, Festus will be angry with you, saying "Good, good. And you've got the Writ of Passage, too, I see. So there's that. I've also received word from Markarth. It would seem Anton Virane has suffered an untimely fate, as well. Good. But unfortunately, that inn is abuzz with the news of somebody killing one of their guests! What, hiding the body was too much for you to handle? Bah! Useless. Here's your gold. Now go see Astrid. The time to move against the Emperor has finally come. Sithis help us all."

If you tell Festus that the Gourmet is dead but you don't have his papers with you, Festus will be upset "Good. And his Writ of Passage? Oh wait, let me guess - you don't have them. Fool! Amateur! Without those papers you'll never be able to present yourself as the Gourmet! Off with you! Back to the body to retrieve them!"

If the Gourmet is dead, you have the papers, but you didn't kill Anton Virane, he'll go on a similar rant "Good, good. And you've got the Writ of Passage too, I see, so that's done. But why? Why, pray tell, have I received word that Anton Virane is still walking around Markarth, hale and healthy as the day he was born? Back to Markarth with you! Virane must be silenced! He's a potential witness, you witless dagger jabber!"

If Festus sent you back for some reason, speaking to him once you return will have him say "Ah, you're back. Ready to try again, are we? Let's start from the top. You were sent to kill the Gourmet. And he is..." Telling he's dead will have Festus relieved, but he'll also feel haste to send you to Astrid "Right, which we had already established. And you managed to hide the body as well? Good. You've got the Writ of Passage too, I see. So there's that. And Anton Virane has suffered an untimely fate, as well. Good. Well, looks like you completed the contract as directed. Finally. A little sloppy, but, well... done is done. Here's your gold, with a little extra for hiding the body. Now go see Astrid. The final stage of the contract has come. The Emperor must fall."

If you completed the quest perfectly, Festus will greet you happily afterwards. "Ah, good to see you, brother/sister. Gearing up to kill the Emperor? Exciting times. Exciting times, indeed." Otherwise, he'll say "Look. I gave you a contract, and you completed it. Barely. Now let's go back to you being insufferable, and me being... me."

When you finish To Kill an Empire, and return to Sanctuary, you will find Festus' body pinned to a tree by numerous arrows, just outside of the entrance. 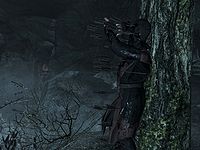 During Destroy the Dark Brotherhood!, you will be sent to kill every Dark Brotherhood member in the Dark Brotherhood Sanctuary, Festus will be one of the required people to kill. During this quest, his normal spells get replaced in favor of Fireball, Flame Cloak, Close Wounds, Ironflesh, Greater Ward, Grand Healing, Lesser Ward and Flames. His iron dagger will get replaced by a steel one and he will also carry leveled gold as well as one leveled restore magicka potion.