The UESPWiki – Your source for The Elder Scrolls since 1995
< Skyrim: NPCs: Daedra
Jump to: navigation, search 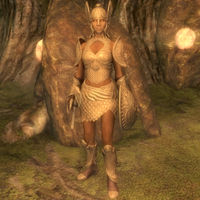 Golden Saints, also known as the Aureal, are humanoid golden-hued Daedra that use golden avian-themed armor and weapons. They are aligned with the Daedric Prince Sheogorath, and they are very intelligent and generally hostile. Despite their angelic figure, they are a proud, arrogant race who are quick to anger and cruel in their punishment.

They are added to Skyrim by the Saints & Seducers Creation, and they only appear as summoned Daedra.[verification needed — see talk page]

There are two types of Golden Saints, based on their preferred fighting style (melee fighters and archers).

These Golden Saints belong to the CombatWarrior1H NPC class and use one-handed weapons in battle. They wear a unique version of Golden Saint Armor available only to them and wield a Golden Mace, Golden Sword, or Golden War Axe.

These Golden Saints have the Ranger NPC class and wield bows to fight from a distance. They wear the same unique Golden Saint armor as their melee counterparts and use a Golden Bow.

They also carry a Golden Dagger, and a quiver of 40 Golden Arrows.

For more information on Golden Saints in the Elder Scrolls universe, see the lore article.

This Skyrim-related article is a stub. You can help by expanding it.
Retrieved from "https://en.uesp.net/w/index.php?title=Skyrim:Golden_Saint&oldid=2092270"
Categories:
Hidden categories: