The UESPWiki – Your source for The Elder Scrolls since 1995
< Skyrim: Creatures: Undead
Jump to: navigation, search 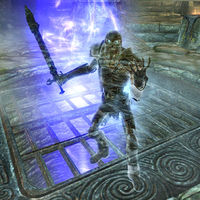 Halldir is a powerful draugr who can be found in Halldir's Cairn. He is a powerful mage and has been draining the life from anyone unfortunate enough to stray into his lair in order to preserve and eventually restore himself to full life. He carries a unique weapon, Halldir's Staff.

During battle, when he loses a third of his health, he will disappear and split into three different elemental versions of himself. Once these versions are killed, his ghost materializes and can be defeated.