The UESPWiki – Your source for The Elder Scrolls since 1995
< Skyrim: Places: Nordic Ruins
Jump to: navigation, search 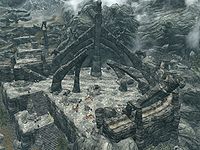 Rannveig's Fast is a Nordic ruin in the mountain range in northern Whiterun Hold and just south of Morthal. The ruin is situated between Cold Rock Pass and Swindler's Den. It is the secret lair of Sild the Warlock, who is guarded by his ghost adventurer and subjugated ghosts.

The ruins have a large exterior area before the entrance, and one interior zone: Rannveig's Fast. The hostile ghosts can be found around the entrance as well as inside the ruins. The interior contains a word wall which teaches part of the shout Kyne's Peace, and also contains an unusual gem.

There are three subjugated ghosts and a ghost adventurer guarding the exterior of the barrow. Depending whether you travel from Rorikstead or through Cold Rock Pass will depend on which you encounter first. Traveling from Rorikstead you will encounter the first subjugated ghost on the path shortly before reaching the first set of stairs leading up to the entrance. On the next level up are two more subjugated ghosts and the ghost adventurer being on the highest level of the exterior. There are several barrels on various levels and an old camp consisting of two tents and an extinguished camp fire on the same level as the entrance. Above the entrance a spellcasting skeleton who carries a random low-level staff can be found.

You enter into a large room with natural lighting from the outside through holes in the ceiling. There are a number of stone pillars supporting the roof and quite a bit of plant material covering the floor including two red mountain flowers and a blue mountain flower. There is nothing else of interest in this first room. The next corridor is to the north and descends some steps before ending with a wooden slated wall; the path continues around this wall to the right. Just past the wall there is a subjugated ghost standing in front of a stone table holding a troll skull, a potion of minor stamina, a random potion and a leveled healing potion. To the right of the table is an urn. The corridor continues to the north, down some more steps. At the bottom there are three burial urns with a random potion and a potion of health among them.

The corridor continues to the east before opening out onto a balcony with stairs leading down to a large room with a subjugated ghost patrolling and plant material covering a large portion of the floor. There are several opened sarcophagi with dead draugr on the ground. Among the plants is a thistle and at the far end of the room you can see the word wall and a chest. If you approach the chest and word wall down the middle, you will activate a trapdoor in the darkest part of the floor. The chest is unlocked and empty, just there as bait for the trap which will drop you quite a way into a locked cage with several dead bandits. There is an apprentice-locked wooden door on the south wall which opens into a small room with an unlocked chest, a potion of minor healing and a dead draugr. Opposite this door is a doorway in the north wall that immediately turns to the east and splits with a closed gate to the left and to the right a corridor that twists and turns and climbs several flights of stairs before leading to a small room that contains a lever that operates the closed gate previously seen. There is also a doorway that leads to a walkway above the room with the word wall. The walkway leads across to another small room containing a subjugated ghost, a dead bandit whose hand is reaching for a diamond inside a stone bowl. Next to the bowl is a bookcase with an apprentice-locked chest partially on the bottom shelf with two potions of minor healing on the shelf above.

Backtrack to the previously gated path and proceed down the steps to another corridor heading east down some more stairs; there is a subjugated ghost guarding the top of this corridor. At the bottom of the first flight of stairs the corridor turns to the south and continues down several more flights of stairs before opening out into a room with a wooden door opposite you and a lit brazier on your left. Most of the room is off to your right and you will see Sild the Warlock roaming around some cages, including the one that you would have fallen into if you fell through the trapped floor. There are bookcases on either side of the room between where you enter and where you can see him, the one on the right has a potion of minor healing on a shelf, past this on the right is a stone table with an iron dagger, a potion of minor healing and a potion of regeneration. If you approach sneaking and undetected, Sild will say, "I know you're up there. Go get the treasure. Doesn't it look pretty?" At this point a body will drop into the circular cage and he will complain, saying "Well... that's disappointing. This one didn't survive the fall either. No matter. Another one will be along any time now." Just past the table the room is split in half by twin gates, with the left half being closed, but the right gate being open. On the far side of the pillar that separates them is a pull chain that operates these gates.

You'll next pass four cages- two on either side. The first cage on the left contains a dead bandit. The next on the right has been destroyed by a cave-in and the second on the left is standing empty and open. Next to this is an expert-locked chest and table containing an alchemy lab, Sild's Journal, a copy of the Destruction skill book Horror of Castle Xyr, an enchanted iron dagger, three random poisons and an unusual gem. Next to the table is a bookcase with two potions of minor healing, a poison and a copy of The Aetherium Wars. In the center of this end of the room is the large circular expert-locked cage with four dead bandits in it. To the right of this cage is the corpse of Sild's assistant, and between her and the circular cage is a satchel containing a copy of Rannveigs Fast key, that will open all of the cages in this room. Further to the right are four more cages- three locked and one standing open. One contains a dead wood elf and one a dead dog. There is a locked cage containing a dead bandit behind the circular cage. To the left are four final cages - three locked and one standing empty and open. In one of these cages is a dead Breton with a potion of health. Between the first bookcase and the four cages on the left is a second bookcase, but it contains nothing of interest. Sild also carries a copy of Rannveigs [sic] Fast key.

All the way back to the eastern end of this area where you entered, there is an unlocked wooden door leading to the south and up some steps before turning to the west and continuing up several more flights of stairs. There is a subjugated ghost patrolling here, even if Sild is dead. At the top of the stairs there is a wooden door on your right that leads up to a small room containing a dead draugr. On the left of the previous corridor is an expert-locked iron door that is opened using Rannveig's Fast key and leads into a room containing a stone table with two potions of minor healing and an unlocked chest on it. To the right of this is an empty bookcase. In the southwest corner is an iron door that leads outside. If you turn and face the door as soon as you exit, you will find four samples of hanging moss growing. Using this exit places you near Drelas' Cottage.