The Synod and the Staff[edit]

From the events of Good Intentions, you have learned from both the Augur of Dunlain and Savos Aren that the Staff of Magnus is a necessary part of averting the prophesied disaster. After speaking with Savos, ask Mirabelle what she knows about the Staff of Magnus and its whereabouts. She is a bit skeptical at first, but does mention that the members of a mystical group, the Synod, recently questioned her about it. While she did tell the mages that the College did not have the Staff she remembers the group talking about the Dwemer ruin Mzulft. She speculates that the Synod group may be traveling there to locate the Staff.

Your Journey Begins in Mzulft[edit]

Mirabelle will mark Mzulft's location on your map: southeast of Windhelm. You may reach it by traveling on the road south from Windhelm Stables toward Riften. As you enter Mzulft's interior, you will find a Synod researcher, Gavros Plinius, uttering his final words, "Crystal... gone.... Find...Paratus...in Oculory..." Search Gavros to find a research log which indicates he was sent here by the Synod Council with a "focusing crystal" needed to pursue some mysterious effort, and that the crystal needs to get to the Oculory right away. Take the Mzulft key from his corpse to unlock the adjacent door. This man Paratus seems to be an important part of this puzzle, so travel through the extensive ruin to a curious device called the Oculory. Mzluft contains a wealth of Dwemer items and multitudes of the hostile creatures and machines that typically populate Dwemer ruins. A detailed guide to the Oculory is in the table below.

After a lengthy and adventurous journey, go through the door to the third interior area, Mzulft Aedrome. Ascend the ramp and near the top you will find a leveled Falmer and a chaurus. Continue toward a large, multi-leveled room that can be accessed through either of two open doorways. Inside prowl four leveled Falmer, including one of the strongest variant you will find at your level, and one that will be carrying the focusing crystal mentioned in Gavros's research log. You need to obtain the crystal to complete the quest.

Your objective marker will point westward from here, but you should first obtain a key that you will need. To do this, leave the room through the doorway to the east and descend the ramp, then open the door at the bottom. Cross the next room and open another door leading eastward. Proceed until you reach a room containing two dead Falmer. Beyond the next door to the east waits a Dwarven automaton. It can be a Dwarven Centurion of the strongest type you can confront at your level. A Centurion on the other side will not be able to fit through the door to attack you up close, whether the machine breaks open the door or you open the door first. Keeping a distance makes it easy to dodge its steam attacks and pick at the machine with your own ranged attacks. After destroying it, obtain the Mzulft Observatory key from the chest on the east side of the room. Retrace your steps westward, back into the large room where you battled the four Falmer.

Climb the stairs to the west and open the door there with the Observatory key. Beyond this, there is another locked door which you cannot open. When you try to do so, however, you will hear a voice from the other side, and the door will be opened by Paratus Decimius, a Synod member who is expecting Gavros, the dying man you met upon entering the ruin. Paratus will be suspicious of you; but whatever the course of your conversation, when he finds out that you have the focusing crystal, he will agree to work together with you and ask you to follow him. You will note in your quest journal that you have reached the Oculory and that your plan now is to follow Paratus to investigate further.

As he leads you forward, Paratus will explain that the Synod happened on this machine created by the Dwarves for unknown purposes, and that the Synod now intends to try to use it toward some different end. Ascend a curved ramp along a giant sphere, but be careful not to fall off, as doing so can cause you to become stuck. At the top, Paratus will marvel at the magnificence of the device there and ask you to place the crystal into the central apparatus. 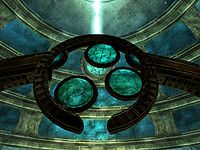 Insert the Crystal into the gap at the bottom of the large ring.

Stand as shown (photo), and place the crystal by activating the "Dwarven Armillary".

When you have done so, the ring will rotate so that the focusing crystal is positioned at the top. Your objective will become to "Focus the Oculory". You will now have two objective markers, one pointing at the device in the center of the room and another at an elevated control console at the southeast part of the room. You can ask Paratus what to do next.

Paratus will indicate that you should direct some fire and frost spells onto the crystal to change the way that it bends the light beams projected by the device. If you look upward, you will see that the device receives one beam of light vertically, and splits it into three beams projected in various upward directions. The ultimate goal is to converge all of the beams into a pattern that will project an image on the wall below the control console.

When the Oculory is correctly focused, Paratus will be initially excited, but then begin to exclaim with distress that there is something wrong. He will communicate that the map should show more, and speculate that there is some kind of interference coming from Winterhold. He may accuse you of attempting to stall his work and suspiciously ask if you knew what they are trying to do.

Paratus will be looking at a map projected onto the wall under the control console. Speak to him and he will accuse you of trying to sabotage the Synod's efforts and demand that you explain yourself. Whatever the course of the ensuing conversation, Paratus will ask if—or assume that—you have something "powerful" at your college. He will be suspicious about this and toward you, stating that he will be reporting the information to the Synod Council. You'll learn that the Synod intended to use the device to scan the continent for powerful sources of magic, "for the good of the Empire". One way or another, Paratus will let you know that the map indicates that the Staff of Magnus is in Labyrinthian. You must now report this information to the Arch-Mage, Savos Aren.

You may now take a shortcut exit or return the long way back through the ruin. To take the shortcut, leave the room containing the Oculory. A short distance ahead, just past the barrels in the hallway, there is an exit door to the right. If you turn toward it, Nerien, the Psijic Order member who appeared to you in Saarthal, will visit you again. He will warn you that you will encounter difficulties ahead, but assure you that you are on the right path and that you will prevail. He will then urge you to return to the College immediately. You will not receive Nerien's visit if you leave through the main entrance, but this will not impact your progress through the quest. 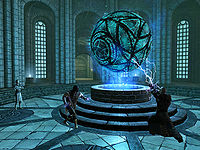 Ancano casting a spell on the Eye of Magnus

As you enter the Hall of the Elements, you'll find Arch-Mage Savos and Mirabelle in a panic. The gate to the room containing the Eye of Magnus is blocked by a barrier that Mirabelle speculates is some kind of ward, and the two of them implicate Ancano in possibly creating it. They will then begin casting Destruction spells at the barrier in an attempt to destroy it. If you speak to Savos, he will ask for your help in destroying the barrier, and say that they need to know what Ancano is doing in there. You can help break down the barrier with Destruction spells, but whether you do or not, the door will eventually open, and they will rush in. Savos will approach Ancano, who is casting a spell at the Eye, and command him to stop. Mirabelle will warn Savos not to go near Ancano, but Savos will begin casting a spell at him. At this point, all will go white, and the next thing you experience will be awakening in the Hall of the Elements with Mirabelle asking if you are all right and saying that she needs your help. When you reply that you think you feel well, this quest will complete and the next quest, Containment, will begin with the objective of finding the Arch-Mage, as Mirabelle requests of you.

One achievement is unlocked when you complete this quest: