The UESPWiki – Your source for The Elder Scrolls since 1995
< Skyrim: Places: Cities
Jump to: navigation, search 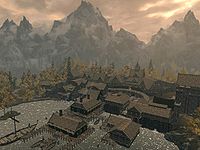 Riften is the capital city of the Rift, located in the southeast corner of the hold. The city lies near the borders of both Morrowind and Cyrodiil, and is home to the Thieves Guild, who inhabit the sewers beneath Riften known as the Ratway. Honorhall Orphanage is located in the city, as well as Mistveil Keep, the jarl's residence.

When you come to Riften for the first time, the guards will tell you to head to the north gate, where you need to pay a tax before entering the city. You can choose to pay the tax (the amount depends on the level of your character), or try to persuade or intimidate the guards, convincing them to open the door for free. Another option is to commit a crime and be arrested. You will be taken to the city's jail inside the walls, and released outside the jail, or you can escape. Or you can enter from the Black-Briar Meadery's back door (near the western gate), or through the sewer grate next to the docks that leads into the jail. Alternately, with a good enough pickpocket level, one can steal the key off of the guard demanding pay.

The market at Riften Grand Plaza is made up of stalls run by a few of Riften's citizens: Madesi, an Argonian jeweler whom you can assist in finding materials for his jewelry; Grelka, a cranky armor merchant who offers expert Light Armor training; Brand-Shei, an Argonian-raised Dunmer who sells a little bit of everything, and Marise Aravel, who sells fresh meat and produce. Brynjolf, a merchant of ill-repute, can also be found here. Down on the lower decks near the canals is Elgrim's Elixirs, which is run by Elgrim and his wife Hafjorg. The forge is run by Balimund, who seems quite proud of his work, along with his apprentice Asbjorn Fire-Tamer. The Pawned Prawn is run by Bersi Honey-Hand and his wife, Drifa. Finally, there's the Black-Briar Meadery and the town inn, the Bee and Barb, which is run by Keerava and Talen-Jei.

Riften is also home to a powerful noble family, the Black-Briars. Maven, the head of the family, owns the Black-Briar Meadery, and has ties to the Thieves Guild and the Dark Brotherhood. According to Maul, "If she tells you to do something, you damn well better do exactly what she says", indicating that she is not someone to trifle with.

For more historical information on Riften, see the lore article.

Most of the Thieves Guild quests start here. For details, see its page.