The UESPWiki – Your source for The Elder Scrolls since 1995
< Skyrim: Items: Miscellaneous Items(Redirected from Skyrim:Soul Gem Fragment)
Jump to: navigation, search 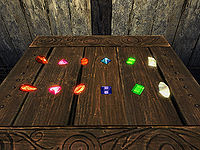 Gems are valuable gemstones that are used to create jewelry. They can be found randomly when mining ore veins, or in random loot. A separate page details soul gems, which are special types of gems used for soul trapping.

All of the items on this page are traded by jewelry merchants, and can also be sold to general goods merchants.

Most gems that you find are randomly generated, meaning that most of the possible locations are the same for all twelve types of gem. The gems that appear in randomly-generated loot depends on the player's level. The "Level (Loot)" column in the following table applies to most locations where gems are found; the "Level (Merchant)" column only applies to merchant inventories. Merchants do not stock diamonds, emeralds, or any flawless gems.

The leveled list is weighted so that the chances of high-level gems continue to increase as your level improves (e.g., flawless garnets are two times more likely to appear at level 6 than level 4), but there is always a chance of receiving even the lowest level gems.

Possible locations for random gems (all using the loot leveled list) are:

Having the Prowler's Profit ability (from completing the quest No Stone Unturned) causes many more gems to appear. Specifically, 1-4 additional gems are guaranteed to appear in each of the following locations:

This means that most of the time you will get 2-3 additional (leveled) gems.

Statistically, urns and burial urns are by far the most common source of Prowler's Profit gems; it is entirely possible, assuming you loot every urn and burial urn you come across, to collect gems at a much faster rate than you will be capable of selling them.

General goods merchants generally have a 25% chance of stocking two gems, but only standard amethysts, garnets, rubies, and sapphires.

Note that although many of the gems listed below are guaranteed to occur, they can be difficult or even impossible to find, as gems are particularly prone to being scattered, especially during combat, and may end up coming to rest in a location where they cannot normally be accessed.

These items are classified internally as gems, but have other special uses.