The UESPWiki – Your source for The Elder Scrolls since 1995
< Skyrim: Items
Jump to: navigation, search 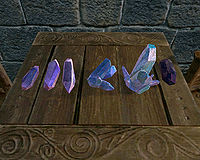 Soul Gems are miscellaneous items which can be used to trap the souls of dying creatures or NPCs. The resulting filled soul gems can be used as power sources for enchanted items, either when initially creating custom enchanted items or when recharging depleted enchanted weapons. Soul gems come in a range of capacities, from petty to grand, plus some special soul gems. Only black soul gems and the Black Star can be used to capture the soul of an NPC, which is always a grand soul in size. There are also soul gem fragments found in the game. These are classified as minor loot and are not actual soul gems.

Empty soul gems can also be harvested from geode veins, which are only found in Blackreach. Each mined vein will result in 2–3 soul gems of any size, including black soul gems. The mined soul gems are level-dependant; at level 16 grand and black soul gems will start to appear, and the probability for either will max out at level 31.