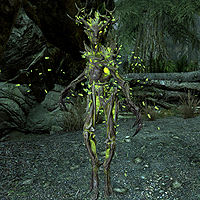 Spriggans are malevolent nature spirits appearing as glowing, green humanoid females made mostly of wood. They can restore themselves to full health easily, and can call various animals to aid them in battle, even normally non-hostile creatures such as foxes and deer. Spriggans also have the ability to summon swarms of insects to attack. They are weak to fire. Spriggans can be an unwanted surprise in seemingly peaceful caves, as they blend in with the foliage using an invisibility spell, then attack when you pass them. Some even seem to inhabit the trunks of trees, stepping from within them when someone comes too close.