All Hell Has Broken Loose[edit]

When arriving back at the College, you will see that all is not well. Tolfdir and the other college mages have been awaiting your return. A magical force field created by the Eye of Magnus now surrounds the college and Tolfdir will tell you of Mirabelle's death. Looking to Tolfdir for direction, he will say, "You're the one with the staff, my dear/boy. If it can help us get inside the College, and reach Ancano, we'll have to hope there's a way to stop all this." That is your cue to equip the staff of Magnus and lead the charge into the College.

The Staff and The Eye[edit] 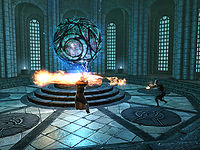 Tolfdir tries to stop Ancano from activating the Eye of Magnus.

Aim the staff at the barrier and it will dissipate, allowing safe passage into the College. The quest now is to get to the Hall of the Elements where Ancano is trying to activate the Eye of Magnus. Ancano will proclaim that he has the power to destroy the world at his fingertips, and that he cannot be stopped. He has become connected to the Eye at this point and absorbs more and more power from it. Tolfdir will cast a fire spell at Ancano, but to no avail. 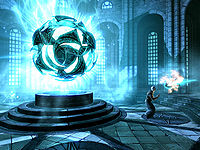 The Eye of Magnus at full power

Tolfdir tells you to use the staff on the Eye. It will begin to crack open, then emit a blinding flash, and you will be briefly stunned. Both Tolfdir and your follower (if you have any) will be paralyzed and remain this way until Ancano is dead. When the Eye is fully open, it will spawn magic anomalies and Ancano will lose his connection with it. The Eye will emit a blinding light; after this happens, continue to use the staff on it until it fully closes again. Ancano is vulnerable at this time and he should be busy dealing with the magic anomalies. Start inflicting damage. If you take too long, Ancano may reopen the eye and become invulnerable again; in this case, simply repeat the procedure and he will eventually succumb. Tolfdir will assist in eliminating the anomalies.

It is not recommended that the staff be used for battle, as it can quickly run out of charge. Fortunately, you can recharge it with the soul gems dropped by the magic anomalies, though the staff requires almost two grand soul gems' worth to fully recharge.

When Ancano is defeated, ask Tolfdir what you should do now. While he explains that he does not know how to contain the Eye, Quaranir, of the Psijic Order will appear. Quaranir will congratulate you, telling you that you have met their expectations. He will assure you that the Psijic Order will safeguard the Eye, which might otherwise destroy the College along with the rest of the world. He will observe that the world is not ready for the Eye, as Ancano just demonstrated, and declare you the new Arch-Mage of the college. Two additional members of the Psijic Order will appear, surround the Eye, and then vanish in a glow of light, taking the Eye with them.

Tolfdir will then affirm that you should be the new Arch-Mage, and give you the key to the Arch-Mage's Quarters and the Archmage's Robes.

One achievement is unlocked when you complete this quest and finish the questline:

Note: This workaround may resolve some of the following bugs: Exit the college and fast travel to another city. Tolfdir should follow you there and you should get a quest update stating that you have defeated Ancano. Fast travel back to the college and speak with Tolfdir to complete the quest. If he doesn't arrive with you, simply wait (up to a day or two) for him to return.