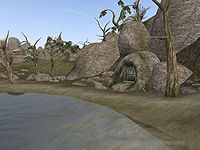 Dungra is a large cave on the shores of Lake Boethiah, close to Tel Mothrivra containing slavers. To reach it, head south from Tel Mothrivra until you reach the shoreline then bear southwest. The cave will be on your left.

The leader of the inhabitants seems to be Agarond, since he can be found in the room with the double bed and the other seven have to share the four bunk beds. The gang doesn't have anything of huge value: there are a couple of sacks of moon sugar and some crates of weapons and armor but nothing noteworthy.

Part of the cave is underwater, and up to five leveled creatures can be found in its depths including, oddly, a winged twilight. 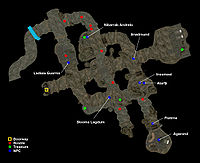