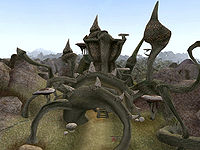 It is modest in size and peculiar in that no levitation is needed to reach the top of the tower. The three rooms in the Lower Tower and Upper Tower are connected through a set of winding hallways. This isn't true for the private quarters of the wizard (Mithras Tower), which are suspended on a root south of the tower. Levitation is required to reach it and the best place to cast it is upon the big terrace at the top of the tower. Mithras' throne room is located across the entrance to the terrace and this is where you can find the ruler of Ranyon-ruhn.

If you are looking for treasures or services you will be disappointed. The only treasure is the daedric hide armor worn by Master Mithras and the four magic skill books which can be found in Mithras Tower. There are no services within the tower, but the nearby town of Ranyon-ruhn has plenty of them. The main reason of visiting the tower are the quests that will eventually save the mine in Ranyon-ruhn. Most of them can be started by talking to Master Mithras.