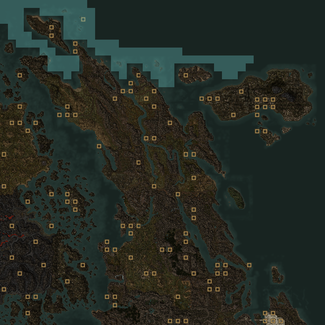 Map of the Sea of Ghosts region

The Sea of Ghosts is the cold sea that borders all the northern coasts of Tamriel and surrounds the Telvanni Isles.

The only notable land feature is Urlis Rock; there are also a few grottoes and shipwrecks underwater. Along with the Telvanni Isles, the region borders Molagreahd, Boethiah's Spine, and Azura's Coast to the south, and the waters of Sheogorad to the southwest.

A list of places found in the Sea of Ghosts region.

Since this region only consists of a big sea, there are no settlements located within it.

A list of quests involving the Sea of Ghosts region.

This Tamriel Rebuilt-related article is a stub. You can help by expanding it.
Retrieved from "https://dev.uesp.net/w/index.php?title=Tes3Mod:Tamriel_Rebuilt/Sea_of_Ghosts&oldid=2000213#Bedaves_Indaram"
Categories:
Hidden categories: