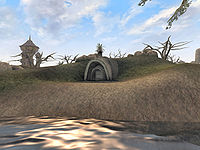 Simply head west from Baldrahn until you reach the river and the entrance to the tomb will be a little way to the south.

The treasure in the tomb is unremarkable, consisting of the usual potions, clothes, gold and scrolls that are placed as offerings on the altars that fill the corridors. The most interesting piece of treasure is a Silver Sparkblade. 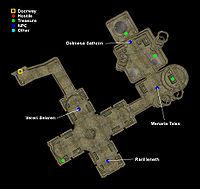