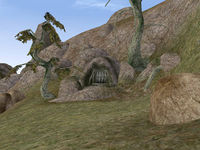 Pahunsabi is a large cave on the northern coast of the Boethiah's Spine region, on the eastern side of the great bay between Firewatch and Bal Oyra. To reach the cave from Bal Oyra, head south from the town along the coast instead of the road, and you'll find it on your left. From Firewatch you can head north out of town then levitate over the mountains, or south and follow the southern edge of the mountains until you reach the bay.

In the first zone, most loot is located in the central cavern, and in another room to the northwest where you will also find a copy of Unnamed Book, a Short Blade skill book. Most of the items are standard bandit loot, with nothing else really important. The same is true of the Bandit Cave. All in all, there's a lot of treasure to gather, but it's all unremarkable. With twelve people guarding it, there are definitely easier places to seek a fortune, especially for lower-level characters.