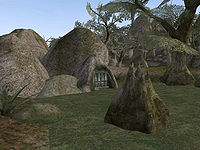 The cave is almost due east of Cephorad Keep. The easiest way to find it is to head north from the keep and follow the road to the first junction. Head southeast over a bridge near a waterfall and immediately after the bridge, turn left. Just ahead is a small swamp, and the door Uddunapsit is on an outcrop at its edge.

Inside are four hostile residents, three of whom are dressed in Imperial Legion uniforms, suggesting some kind of relationship with the nearby keep. They aren't guarding anything of any great importance, just the usual collection of ingredients, weapons and armor. 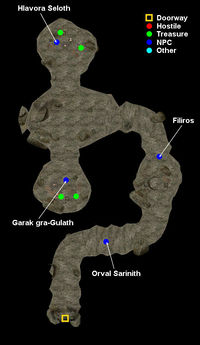