The UESPWiki – Your source for The Elder Scrolls since 1995
< Morrowind: Tes3Mod: Tamriel Rebuilt: People
Jump to: navigation, search 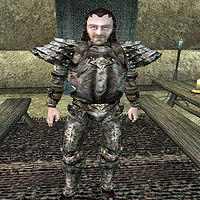 Hasilius Brahn is an Imperial knight with a sad life story. A year ago, he was a captain in the Imperial Legion in Cyrodiil living a good life with good pay and a good wife until one day a messenger arrived. He gave Hasilius a message containing an order to clean out the ruins of an old fort and kill the "foul creatures" that lived there. Hasilius welcomed the message as he believed it offered an easy route to glory and fame so he set off to the fort with a dozen men and his wife. The route was anything but easy, however, and the assault on the fort ended with his wife dead and Hasilius fleeing blindly. He has been drowning his sorrows ever since, but no matter how much he drinks, cannot blank out the memories. He has even sold his precious Silver Longsword to cover his drinking debts.

Perhaps there is some way in which Hasilius can be made to look on the bright side of life once more.