The UESPWiki – Your source for The Elder Scrolls since 1995
< Morrowind: Tes3Mod: Tamriel Rebuilt: Places: Tombs
Jump to: navigation, search 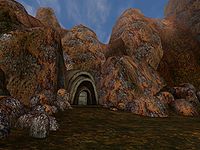 To reach the tomb, take the southeastern exit out of Marog. Follow the path and then take the southern path at the crossroads. Follow the dirt path and cross over the two Indoril bridges. After crossing the second bridge the tomb should be visible to the left (east of the path).

This tomb contains nine undead altogether, including one greater bonelord boss. It contains a large amount of loot, including several potions, gems, and weapons. Some highlights include: a silver flamesword, the Long Blade and Block skill books 36 Lessons of Vivec, Sermon 23 and Sermon 7, and a bonemold cuirass and greaves. The greater bonelord is found in the final chamber, which is behind a locked and trapped door. There is also a dead Nordic adventurer by the entrance.