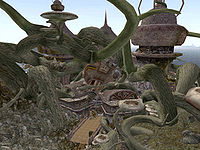 Bthzundcheft is a large Dwemer Ruin in danger of complete destruction by the local vegetation. The ruin is easy enough to find: simply head west along the coast from Port Telvannis. The main entrance is on the north face of the ruin, although another can be found in a separate tower in the sea to the south. 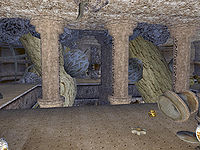 Vegetation is slowly destroying the ruin

Bthzundcheft is one of the grander Dwemer Ruins you will encounter. It is split over two levels, with three towers rising from the upper level. The main entrance to The Hall of Towers is guarded by Kalort, a Redguard smuggler, and leads into the root-infested hall at the south. Two other NPCs guard this level, but their stash amounts to little more than a few crates of Dwemer weapons and armor. The three towers are each capped with a chamber containing a small number of other Dwemer items, but for the most part, the NPCs seem to have completely looted the ruin.

The Hall of Machines is a different matter. Although there is an NPC here too, he has yet to defeat all the remaining centurions, and nine of them remain. Tubes, coheres and other Dwemer items lie scattered around the level, and the southeasternmost room has quite a few items to pick up. This is also where you will find the remains of Nedheleg if you are on the appropriate quest. A door to the southeast leads out into the Sea of Ghosts, south of the main ruin. 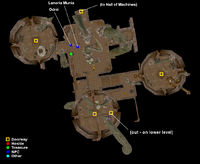 Map of Bthzundcheft, Hall of Towers 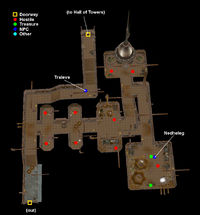 Map of Bthzundcheft, Hall of Machines
Retrieved from "https://en.uesp.net/w/index.php?title=Tes3Mod:Tamriel_Rebuilt/Bthzundcheft&oldid=1930285#Lanoria_Munia"
Categories: