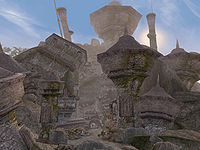 Since Kemel-Ze is so large, it makes sense to discuss all of its zones separately, which will be done below. Kemel-Ze is one of the largest and most famous of the Dwemer ruins in Morrowind. It is situated on a steep peninsula which juts out into the Inner Sea, together with the Telvanni town of Marog.

It has been plundered for a very long time, and this is why the first zones of the ruin are devoid of Dwemer items and machinery. The archaeologists of the Imperial Archaeological Society have taken up residence beyond these first zones and are determined to rout out all the secrets of the ruin. But, it is certain that there are still many unexplored areas in this ruin. The determined adventurer should worry about Dwemer machines and ancient Dwemer puzzles, though, to reach the bottom most chamber of this humongous ruin.

Room By Room Guide of Kemel-Ze[edit]

The Archaeologist's Base is, not surprisingly, the main base for the archaeologists in Kemel-Ze. It consists of three different levels: the bottom has Ficois Meras and a couple of guards; the middle has the guard captain, Roland, and Hiramas Merthu, a minor trainer in Short Blade, Destruction, and Light Armor; the top has Curvus, Karsa, and a guard. Renie Cierraise, the head of the expedition, is in a side room on the top level. There are four doors on the bottom level, the north one goes to Vels, the west one goes to Mfugchazn Tgun, and the two south ones go to Carkurngth.

Aster is the entrance to Kemel-Ze. It contains minimal treasure, as it has been looted for hundreds of years. Marcus Tabern, who is cleaning up Darran Flavius' old campsite, is in the northwestern corner, and there are numerous drinks near him. The door to Bznch is to the west, and a door to Cells of Scarab's Pass is in the east.

Bzntch is centered around a large hall with three exits. The southeast one leads to a dead end, the southwest one leads to Shorebreak Well, while the north one leads into a hall with doors to Aster on the eastern end and Dzuran on the western end.

Carkurngth consists of two large hallways that both lead to the Archeologist's Base. The western hall has some dead centurions, and comes from Shorebreak Well. The eastern hallway comes from Cells of Scarab's Pass. The two halls do not connect.

There is little of interest here, aside from two NPCs, Darenith Minvar and Nurlith Merin, who don't seem to like you being around. In the west is a door to Aster, in the southeast a door to Karzanch, and in the southwest a trap door to Carkurngth.

The largest of the submerged rooms contains a switch that reveals a set of hidden passageways. These passageways contain a set of vents meant to drain the water from Chefidz and fill Chefidz Bassin. The large submerged room also has a shelf with two keys. These keys can be used to unlock a technician's shaft and a cell door.

Chorus of the Maker[edit] 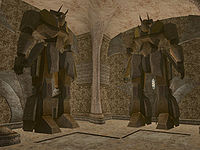 In order to get the lever to work, you will need the Spoiled Dwemer Oil from deeper in the ruins. This will allow the platform to work, allowing access to Chungkefpz Urchurmz.

Chuntench is a room consisting of a large bridge, two doors to Runzchuk, and an extraordinarily dark pit. A night-eye or light spell is recommended for venturing into the pit, however, there is nothing in the pit aside from a divine intervention scroll. High acrobatics, a levitate spell, or a jump spell are recommended if entering the pit as well, as the walls surrounding it are very steep. This is potentially why the divine intervention scroll was placed at the bottom of the pit.

Creeping Vale is the area in between Rzarch and the King's Tomb. It contains a little bit of dwemer loot, as well as a guard, who will warn you not to disturb anything in the King's Tomb. 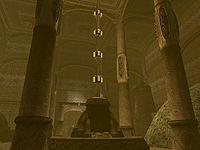 On the right of the entry hallway there is a small room with a dead steam centurion. On the left of the hallway is a large room cluttered with broken pillars. This room connects to another large room which has a guard, Darran Flavius, Durus, Julian Arontus, and Imenas Llothril, as well as their assorted supplies.

The lava pit of Karkanch

A very impressive lava pit. A series of levers can be used to activate a device that's apparently needed for power generation.

Karzanch is the first place in Kemel-Ze with anything of real interest. Behind some locked doors there is a Sentinel Centurion. The area beyond that seems to be relatively undisturbed, aside from a dead adventurer. It contains mostly typical Dwemer loot. 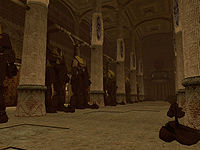 The King's Tomb is a large hall with many large, broken Centurions. It has a console where you can place a Dwemer coherer to turn on the lights. This is the famous hall mentioned in the book, Ruins of Kemel-Ze.

A massive lava pit with little else of interest.

Runzchuck consists of a main room and a few dead end hallways. In the main room is Irvel, a Breton artifact thief, who will sell you a small, non-restocking supply of miscellaneous dwemer artifacts.

Rzarch is basically a long hallway with multiple small rooms containing notable amounts of gems and Dwemer coins. It has (from north to south) doors to Vels, Creeping Vale, and Stafaznir.

Shorebreak well has a couple hallways leading a central room with miscellaneous Dwemer contraptions. The hallway to the north leads to Carkurngth, to the east is Bzntch, and to the west is a door to Chuntench.

Skywatch gallery is notable only for Nerav Felas, an admitted looter who is in the observatory. Otherwise it is completely empty.

The Tower of Requiem has a single guard standing near a door which can only be unlocked by a key found in Mfugchazn Tgun. Beyond the trap door is a Greater Dwarven Spectre, a little bit of loot and another key. 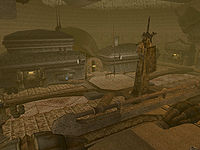 Vels is a large area with a hallway section that leads to the Archaeologist's Base, Chungkefpz, and Btharkhz, as well as a plaza with many smaller buildings, a trap door to Rzarch, and Barmena Lletrith, who is a trainer. The buildings in Vels are Tiuzanch, Oncharanch, Nzadanch, Gurzanch, and Druchanch. Oncharanch and Druchanch have a little bit of miscellaneous dwemer loot. 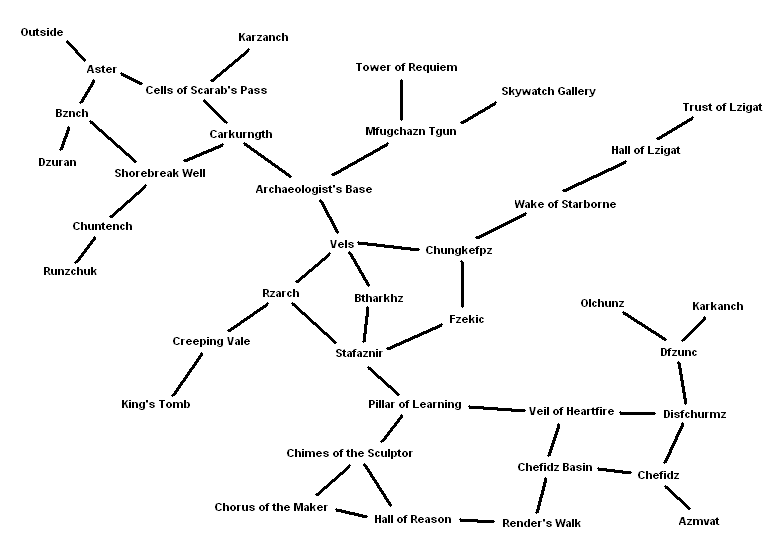 This Tamriel Rebuilt-related article is a stub. You can help by expanding it.
Retrieved from "https://en.uesp.net/w/index.php?title=Tes3Mod:Tamriel_Rebuilt/Kemel-Ze&oldid=2000219#Nurlith_Merin"
Categories:
Hidden categories: