The UESPWiki – Your source for The Elder Scrolls since 1995
< Morrowind: Tes3Mod: Tamriel Rebuilt: Places: Bodies of Water
Jump to: navigation, search 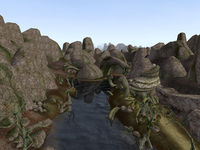 The source of the River Garivun 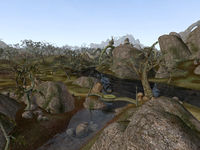 The river's only tributary, just as it enters the Helnim Fields 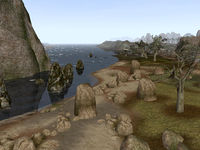 Entering the Inner Sea - the large floodplain on the right

The River Garivun is a short river that winds through three regions of the mainland. It rises in the Boethian Mountains due south of the Telvanni Library, which stands on a narrow neck of land that separates this river from the Bosouada. It flows south through the Helnim Fields and gradually turns southwest before turning sharply north when it reaches Helnim. After passing through the city, the river veers northwest and widens into a large estuary, with the right bank in the Molagreahd, before flowing into the Inner Sea.

The sections of the river that flow through the Boethian Mountains are, unsurprisingly, steeply-banked. As it passes through the Helnim Fields, the land becomes much flatter and suitable for agriculture, then the final section of the river is marked by a wide flood plain and sandy shores.