The UESPWiki – Your source for The Elder Scrolls since 1995
< Morrowind: Tes3Mod: Tamriel Rebuilt: Places: Regions
Jump to: navigation, search

The scattered islands of this archipelago, with their uninviting terrain of barren hills and damp fungal groves, seem inhospitable at first glance. Yet, the Isles serve as the isolated heartland of the reclusive Great House Telvanni. The twisted sprawl of Port Telvannis serves as the House’s capital, and several other towns and plantations populate the surrounding islands. — Tamriel Rebuilt 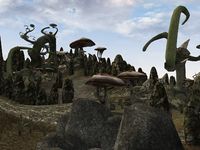 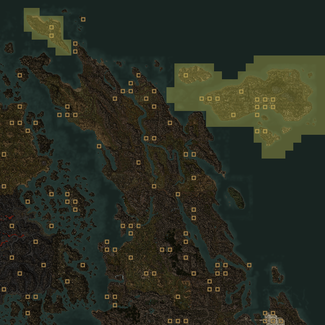 Map of the Telvanni Isles region

The Telvanni Isles are the northeasternmost islands in Tamriel, located in the Telvannis District of Morrowind. As the name suggests, they are controlled by House Telvanni. The isles are home to the great sadrith fungi out of which Telvanni construct their towers.

The region's largest settlement is Port Telvannis. The isles border the Padomaic Ocean region to the south (though the ocean in fact surrounds all of the east and north as well), the Sea of Ghosts to the northwest, and Boethiah's Spine and Molagreahd across a narrow channel to the southwest.

There are four main islands in the archipelago:

A list of places found in the Telvanni Isles region:

A list of quests involving the Telvanni Isles region.

This Tamriel Rebuilt-related article is a stub. You can help by expanding it.
Retrieved from "https://dev.uesp.net/w/index.php?title=Tes3Mod:Tamriel_Rebuilt/Telvanni_Isles&oldid=2000214"
Categories:
Hidden categories: