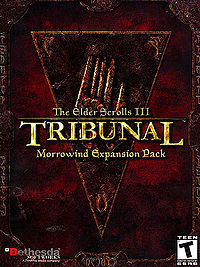 Tribunal is the first of two expansion packs for Morrowind, taking place in Mournhold, a Temple city inside the capital of the Dunmeri province of Morrowind. Two opposing forces seek to manipulate the Nerevarine to their advantage. The ruthless, newly crowned King Hlaalu Helseth seeks to firmly establish his authority, while the divine Almalexia is desperate to retain her grasp on the people. The machinations and intrigues of both sides draw the Nerevarine deep into the sewers, caves and ruins under Mournhold, and to a place lost to Tamriel itself.

In Tribunal, a ruthless new king has taken the throne of Morrowind, while an aging god drifts deeper into madness. Into this chaos you are thrust, with deadly assassins close behind you and Morrowind's uncertain future ahead. Your journey will lead you to Mournhold, capital city of Morrowind, to the Clockwork City of Sotha Sil, and through massive, epic-sized dungeons. The fate of Morrowind is in your hands...again. —Official Summary