The UESPWiki – Your source for The Elder Scrolls since 1995
< User:Vincentius1
Jump to: navigation, search
Wild Elves of Tamriel
by Sage Tjurhane Fyrre of the Nibenay
A book detailing the history of the Tribal Wild Elves (written in 2E 184)

The Province of Cyrodiil

The Ayleids of Cyrodiil wielded a powerful empire that spanned across the heartlands of Tamriel, rivaling the likes of the Summerset Isles, but as many know, they had fallen to the godly might of the Alessian Empire, and the elven race slowly faltered as the Imperials grew to considerable numbers. But as many know, the Ayleids lived well after the Empire's ascension, and continue to do so, as I live and breath. Although they are no longer known as the Ayleids, we are known as the Wild Elves. For the longest time, the Wild Elves lived in isolation and fallen into myth, as elusive as the Ancient Falmer or mythical as even the Stone Elves of Argonia. But as a living example, the Wild Elves are no mere children's story. We are different than of what little remains of the "Ayleids," that live in the hills of Balfiera, or even the ones that served the First Empire. The Wild Elves are a nomadic and cautious group of Ayleids that scattered throughout Cyrodiil or even moved northwest into eastern Hammerfell. While other factions attempted to seek refuge with the Direnni Hegemony or the Bosmer, we were forced to live deep in the Cyrodilic wilderness, far away from the human expansion in the Eight Islands, and their subsequent incursions of the Ayleid's outer nations (i.e., Garlas Malatar, Miscarcand, and Eld Relleis-Mora). Scattered in groups, the Ayleids eventually re-organized in Cyrodiil's most isolated areas. But throughout the Empire's early years, some of these Ayleid groups were hunted down, either kept into slavery or slaughtered for sport. Those that managed to survive reunited with the isolated factions, or went down south to the temple-town of Malada. But as many know the "Cleansing of the High Fane" led to its destruction and the following Blackwood Merhunt of 1E 393 wiped out the civilized Ayleids in Cyrodiil, reportedly for good. However, the isolated elves were slowly growing as more and more refugees found their hideouts. And from then on, the various Ayleid city-states become nothing more than the Wild Elf tribes of Sedor and Elenglynn.

The Wild Elves of Nibenay 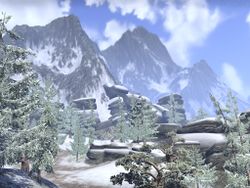 The Jerall Mountains of Cyrodiil

The Nibenese Wild Elves had their origins from the ruined city-state of Sedor, which was the farthest reach of the original Ayleid Empire. It was not much of a city, rather it was a stronghold, established to wrestle control from the Nedic tribes, now known as the "Thousand-Strong of Sedor." But when Pelinal Whitestrake liberated the warriors, the fort was abandoned and swallowed by the winter storms. Records from the archives of the Ayleid Empire indicate that Sedor was lost and there was no interest in re-establishing the settlement. But it was because of this the Sedorian Wild Elves settled here, to essentially go into hibernation, which is what they did. Adopting a similar lifestyle to the Nords of the north, the Wild Elves became hunters, with the versatility to survive. Because of the Jerall's brutal weather, the Sedorians were well hidden from the populous, while in the west, the Wild Elves were surrounded in local legend and myth, the eastern elves' existence was completely unknown, save for several local stories from Cheydinhal or Riften. Eventually, the Wild Elves came out of hiding and began to explore their lost realm in 1E 513, during the reign of Emperor Trebonius. Within the span of thirty-two years, the Wild Elves of Sedor had spread across the Nibenay Basin, splitting into three-distinct factions that live in different corners of the northeast quadrant of Central Cyrodiil. Those that had acclimated to the northern weather remained in Sedor but had ventured into parts of Skyrim and the surroundings of Mount Trolhetta. These tribes were split and led by the "Hecta-Arana." In the traditional Ayleidoon it means the "Exiled-Kings," but in Wild Elvish, it is now the equivalent of a Chieftain. Hecta-Aran Angalyn became the new leader of Sedor. Those that continued their resent towards the Imperials descended farthest down the mountains, to the grasslands of the Heartlands, where it meets the foothills of Nibenay. They inhabited the citadel of Belda, a place considered haunted at the time, and beyond the Empire's reach from the Imperial City. The Beldanese were led by Hecta-Aran Morikynd, a prideful warrior and hunter that sought to spread even further into the south, where it was much easier to hide from the Empire. Finally, the arcanists and scholars traveled to the Great Forest, considered mysterious and the gateway into the great beyond. This tribe became the Mafremola, which translates into the Frostfire. In the seclusion of the Great Forest, they built their tribe in what is now Frostfire Glade. From time to time, the leaders of these tribes come together every year to Sedor, to discuss amongst themselves on their future. These tribes lived in seclusion from the Empire for many years, unlike their brethren of the west.

The Wild Elves of Colovia 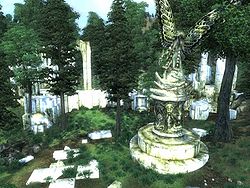 The Wild Elves of the Colovian West come from the last-remnants of the Ayleid Empire. The Nibenay was the heartlands of the early-Nedic civilizations, however, the west was the frontier, where loosely-spread out tribes of Nedes were found, that tend to themselves and sought to explore more of the frontier or expand into the waters of the Abecean Sea. The last of the major-kingdoms were the cities of Garlas Malatar and Miscarcand. As many know, the tyrannical warlord, Narilmor sealed the city from the outside, which ultimately led to its downfall. However, the Elder-King of Miscarcand was known for his stubbornness and prowess as a military commander, and because of that, many Ayleids from the Heartlands fled to the city-state and saw it as their last bastion. The Great Battle of the Fyrelight goes down in history as the Ayleid's last stand, but it too ended in favor of the Empire. These elves were unable to survive as well as the Nibenese, because of how active the humans were in the area. But whatever survived the conflict escaped deep in the Great Forest, to the forest-sepulcher of Elenglynn where they lived in hiding, akin to the Wild Elves of Sedor. From the Hecta-Arana of Elenglynn