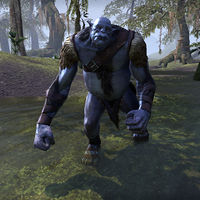 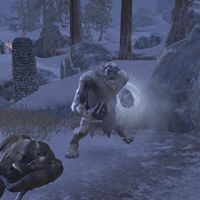 Ogres are large, dim-witted humanoids found throughout Tamriel. They can be found both above ground and below, and deal physical damage with their melee attacks.

Ogres in Wrothgar are sometimes called Snow Ogres and are differentiated from the common Ogre by their thick white fur pelt. Some of whom can even perform powerful frost magic.

This ESO-related article is a stub. You can help by expanding it.
Retrieved from "https://en.uesp.net/w/index.php?title=ESO:Ogre&oldid=2099994"
Categories:
Hidden categories: