This article is about the official add-on released for Skyrim. For information on mortals with the soul of a dragon, see Dovahkiin. For the player character, see Prisoner. 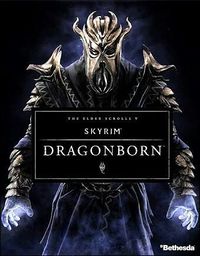 Dragonborn is the third major official add-on for Skyrim. The existence of this expansion was first alluded to by patch files found in the 1.8 Patch, and it was confirmed by Bethesda on 5 November 2012 with an official announcement trailer. Dragonborn takes place on the island of Solstheim, first visited many moons ago during Bloodmoon. The add-on's plot tasks you with uncovering the identity of the person seemingly controlling the entire population of the island, and stopping them.

With this official add-on for The Elder Scrolls V: Skyrim, journey off the coast of Morrowind, to the island of Solstheim. Encounter new towns, dungeons, and quests, as you traverse the ash wastes and glacial valleys of this new land. Become more powerful with new shouts that bend the will of your enemies and even tame dragons. Your fate, and the fate of Solstheim, hangs in the balance as you face off against your deadliest adversary – the first Dragonborn. —Official Summary