The UESPWiki – Your source for The Elder Scrolls since 1995
< Books
Jump to: navigation, search 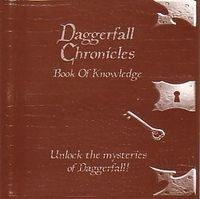 Front cover of the CD inlay

The Daggerfall Chronicles is the official strategy guide for The Elder Scrolls Chapter II: Daggerfall written by Ronald Wartow and published by Bethesda Softworks in 1996. The guide contains hints, walkthroughs and dungeon maps, as well as a unique overview of the game's lore.

Daggerfall itself came with a sheet of paper, folded down to the size of a CD and used as the inlay in some editions, that acted as an advert for The Daggerfall Chronicles, entitled Daggerfall Chronicles Book of Knowledge. One side contained a walkthrough for the Privateer's Hold dungeon taken from the book, while the other side contained the description quoted below, a listing of what the official game guide has to offer, and information on how to order the book.[1]

Nestled in the Dragontail Mountains, protected from trespassers by a magic barrier, lies the Scenarist Guild citadel. Ruled with an iron hand by Nezmyt, the Scenarists are Tamriel's troubadours, bards, and minstrels, whose notes and observations have been compiled into a thousand impressive volumes.

In the Year 370 of the Third Era, Nezmyt created a sect of Imperial scribes who were charted with recording all historical events, beginning with the defeat of Jagar Tharn. Smuggled out by an anonymous renegade guild member, the book, now known as The Daggerfall Chronicles, was hidden in a shrine of the Oracle.

Note: This article is a stub. You can help by expanding it.
Retrieved from "https://en.uesp.net/w/index.php?title=Books:The_Daggerfall_Chronicles&oldid=1877556"
Categories:
Hidden category: