The UESPWiki – Your source for The Elder Scrolls since 1995
< Skyrim: Creatures: Monsters(Redirected from Dragonborn:Karstaag)
Jump to: navigation, search 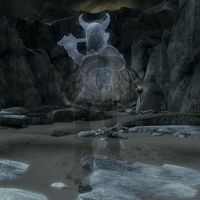 Karstaag was a frost giant who lived on Solstheim, and has been dead for over 200 years. The spirit of this ancient creature can be raised as part of the unmarked quest Summoning Karstaag. After defeating Karstaag, you gain the ability to summon him. However, you may only summon him three times total and it must be outdoors. He is one of the toughest enemies in the game to beat, having nearly double the health of the Ebony Warrior. During the battle, he can summon three ice wraiths at a time to distract you. He is much more powerful than a regular giant, being able to attack with his club, causing you to lose several hundred health points. When summoned, he will appear with a Blizzard around himself, which will ragdoll you if you stand too close to him when he is resurrected. After a short time, the blizzard will vanish and he will have a Frost Cloak surrounding him for the rest of the battle. If you leave the courtyard during the battle, Karstaag will have the blizzard surrounding him again when you reenter, but it will become a frost cloak very soon after reentering.

Karstaag has a 100% resistance to disease, frost, and poison, as well as a 75% resistance to shock. He cannot be ragdolled, and is immune to all forms of paralysis, as well as Mehrunes' Razor, Mora's Grasp, Whirlwind Cloak, and the instant kill effect of Wabbajack. He does have a 25% weakness to fire, however.

This Skyrim-related article is a stub. You can help by expanding it.
Retrieved from "https://en.uesp.net/w/index.php?title=Skyrim:Karstaag&oldid=2109876"
Categories:
Hidden category: