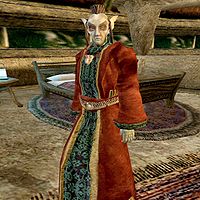 Baladas Demnevanni is a Dunmer sorcerer living in the Velothi tower of Arvs-Drelen, which is located in Gnisis. He is a Wizard of House Telvanni but is not a member of the council until you complete the associated quest. If he becomes a councilor, you will have to persuade him to vote for you as Telvanni Hortator. Baladas is reclusive and generally does not concern himself with the people of Gnisis. He is not quite as arrogant or isolationist as many of the other Councilors and pursues an interest in the Dwemer. People around Gnisis may mention Baladas, calling him a "renegade Telvanni wizard".

He is wearing an expensive robe with matching shoes, a leveled ring, and a leveled amulet. He is carrying a leveled potion, a leveled soul gem, four leveled enchanted items, a key to a cell in his tower, and 300 drakes. Aside from his natural resistance to fire and the sanctuary provided by his ancestors, he knows the following spells: Burden of Sin, Dire Weary, Great Feather, Command Beast, Command Creature, Strong Reflect, Strong Spelldrinker, Wild Spelldrinker, Summon Storm Atronach, and Summon Flame Atronach.

He is accompanied by a Dwemer Shock Centurion he has restored. It will not be hostile to you unless Demnevanni himself is. This animunculus will be given to a Telvanni player upon completion of the Dahrk Mezalf quest.

As the Dwemer left no corpses or traces of conflict behind, I believe that generations of ritualistic 'anti-creations' resulted in their immediate, but foreseen removal from the Mundus. They retreated behind math, behind color, behind the active principle itself. That the Dwemer vanished during a conflict with Nerevar and the Tribunal is merely coincidence."