The UESPWiki – Your source for The Elder Scrolls since 1995
< Morrowind: Places: Mines
Jump to: navigation, search 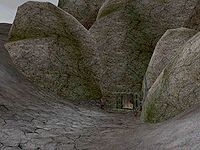 Hairat-Vassamsi Egg Mine is an egg mine west-northwest of Maar Gan. The mine has been afflicted by the blight. It contains only a few Kwama workers and warriors guarding a queen; there are no items of any interest here.

The mine is, however, notable as the scene of a failed quest by another adventurer, Ravila Neryon. This is revealed by a memorial to Ravila in the Outpost at Maar Gan. You may, if you wish, take it upon yourself to complete her mission by curing the queen of the Blight, though no one will acknowledge or reward your actions. 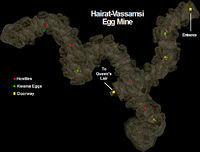 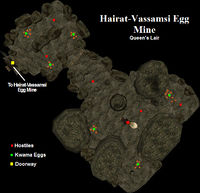